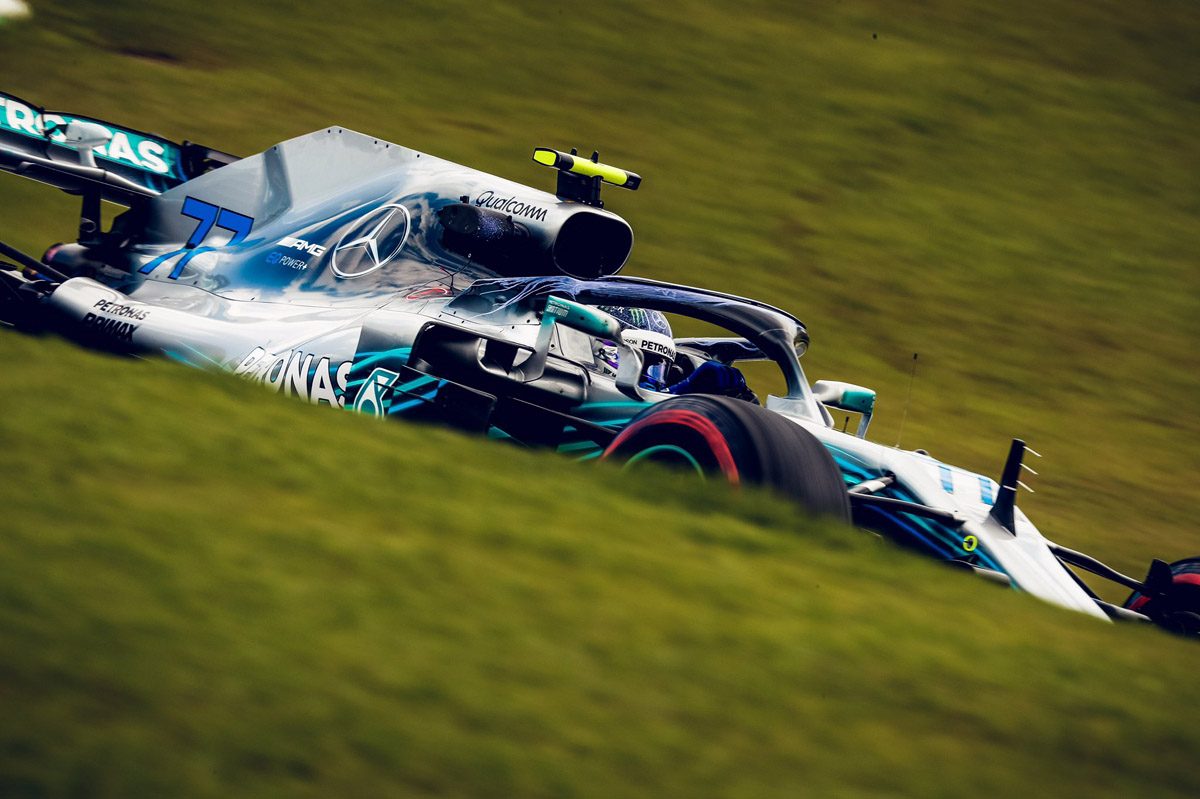 Mercedes topped the second practice session ahead of this weekend’s Brazilian Grand Prix with Valtteri Bottas heading Lewis Hamilton with Sebastian Vettel just off the back of the two Silver Arrows.

The two Mercedes were split by just 0.003s after the session, both setting their times on the supersoft Pirelli tyres.

It was the first time since Italy 2017 that Bottas topped a practice session, with fourth placed Ricciardo set to take a grid penalty for a turbocharger change.

The quick laps were set early in the session before teams focused on long runs and race simulations in the latter stages.

Overcast skies threatened the day, dropping a handful of droplets without ever raining with any intensity.

Max Verstappen sat out half the session as Red Bull worked to resolve an oil leak in the Dutchman’s car, ending fifth fastest having topped the opening 90-minute session.

The leak is believed to have come from a crack in an oil tower at the front of the engine, a crack which most likely occurred during the Mexican Grand Prix.

Tyres were a key considerations throughout the session, with Vettel in particular suffering with the Pirelli rubber on his Ferrari as the surface of the tyre began to open up.

The second Ferrari of Kimi Raikkonen ended the session sixth fastest ahead of Romain Grosjean in the leading Haas.

With Charles Leclerc in eighth and Kevin Magnussen ninth it made for five Ferrari engines in the top 10, which was rounded out by Esteban Ocon’s Force India.

Well down the order was Nico Hulkenberg who struck the wall at Juncao, running wide onto the grass on corner exit before being pulled right into the barrier to end his session.

It left the German slowest of all runners, having been just outside the top 10 in opening practice.

That session was topped by Verstappen from Vettel and Hamilton, the trio split by less then a tenth of a second.

Ricciardo was fourth quickest, having been the first to set a representative lap, from Raikkonen and Bottas.

It was then the two Haas’ with Grosjean ahead of Magnussen and Ocon again sneaking into the 10.

Alongside the regular drivers in Practice 1 were a host of substitutes, with Antonio Giovinazzi in for Marcus Ericsson, Lando Norris for Fernando Alonso, and Nicholas Latifi for Sergio Perez.

Giovinazzi was the highest placed of the three, in 13th place, with Latifi bringing up the rear.

The session also confirmed Ricciardo’s grid penalty as the Australian ventured out early with a new turbocharger, which will see him pick up a five place demotion for Sunday’s race.