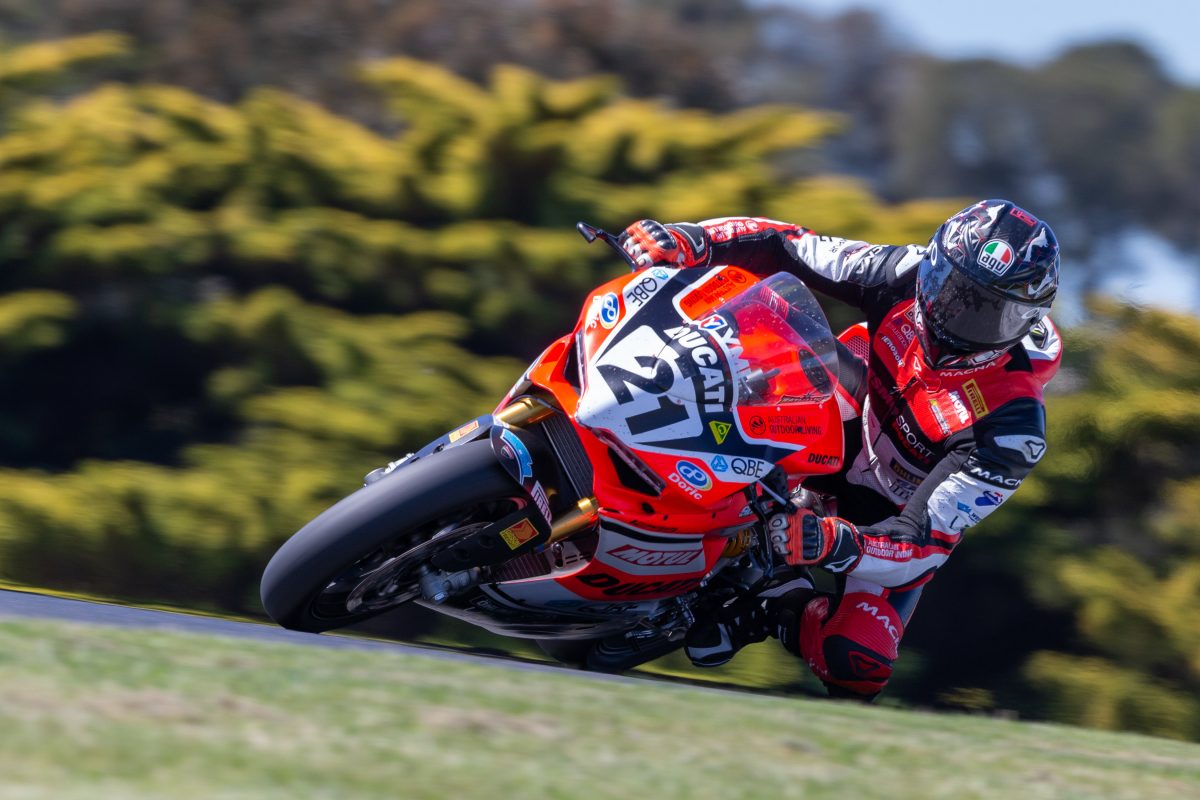 Troy Bayliss has committed to racing in next year’s Australian Superbike Championship after his popular comeback in 2018.

The three-time Superbike World Champion returned to racing after nine years in retirement, interrupted only by a two-round spell as an injury replacement rider in 2015.

He won two races on his way to third in the ASBK standings this year, only three points behind second-placed Wayne Maxwell.

Bayliss co-owns the DesmoSport Ducati team for which he rides, and told Speedcafe.com that he will be back on the grid in 2019, “Unless I sack myself.

“No, we’re looking forward to riding again next year,” he continued.

“We will eventually have the new (Panigale) V4, it depends on when that arrives or for the first race or not; it’s a timeframe thing.

“I’m really looking forward to riding the new bike and even if we miss the first race, possibly, (I’m) still happy to do it on the 1299, it’s a good bike anyway.

“I definitely want to do next year and then see, but for me to finish up on the V4, after starting out in ’98 on the 996, I’ve ridden so many different models of Ducati, so it’s pretty special for me.”

Bayliss turned 49 years old shortly after the start of the season and committed to a major health kick to make the comeback happen.

The Taree-born rider remains bullish about his fitness but had doubts about the campaign after a nasty highside in pre-season testing this year at Wakefield Park.

“It wasn’t planned to do this (come back) and it’s a long story but I basically had the detox after 10 years away, to come back on and get back up to race speed,” he explained.

“I dropped 12 kilos, got off the beers, so much stuff that had to be done, and it took a while to really get going again.

“The first time I hopped back on the bike, the very first ride at Wakefield Park, the bike had less than 35km on it, I crashed there and fractured my hip socket, ran over my neck, and I was laying in the gravel thinking, ‘Yep, I’m not sure.’

“Then we arrived at Phillip Island for the first race at the World Supers and I was still recovering from that and my doctor said, ‘If you have another proper crash and land around your hip area, it could be not good.’

“So I was quite nervous leading up to the first race and I was still so sore as well, I could barely get on the bike, and then went through a few up and downs, had a few half-decent results.

“By Darwin, we won our first race and had pole and since then we’ve been at the front of every race, playing for the win, and I just basically think now I’m going to hit the ground running next year and be in a much better position.

While Bayliss senior is into the second phase of his career, 15-year-old son Oli has been banking solid results in the Australian Supersport 300 Championship in which he finished fourth in 2018.

Oli holds similar ambitions to his father, but won’t be venturing overseas just yet.

“There are a lot of young guys in there doing good. Oli’s just turned 15, this is his second year, and not just Oli; it’s amazing to see the guys’ progress, the experience they get.

“He wants to be a professional bike rider, so we’re waiting and in the next few weeks we’ll know a bit of a direction on what we’ll do next year but it’s going to be here in Australia.

“I think the championship’s great and a few of my old bosses want him over there and they say, ‘If you’re serious, he should be in Europe,’ but I think 15, he’s got to do a bit more schooling yet, and the racing here’s great, so we’re not in a super hurry for that.”

Motorcycling Australia recently released the calendar for next year’s Yamaha Motor Finance Australian Superbike Championship presented by Motul Pirelli, which again kicks off with pre-season testing at Phillip Island shortly before Round 1 with WorldSBK in February.

Bayliss, meanwhile, is currently competing in mountain biking at the Pan Pacific Masters Games, on the Gold Coast.