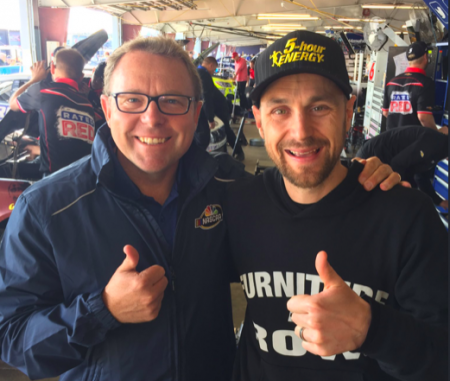 The Australian has been confirmed at the Toyota team as part of a move to bring last year’s series champion Martin Truex Jr. to the squad from Furniture Row Racing, which will close at the end of the year.

Small, the son of race car preparer Les Small, will take up a lead race engineer role on the Truex Jr. car under crew chief Cole Pearn at the Charlotte based operation.

The former Tickford Racing, Kelly Racing, Garry Rogers Motorsport and Paul Morris Motorsport engineer headed to the US in 2014 where he has worked for Richard Childress Racing, before joining Furniture Row Racing last year.

Last season he stepped in as crew chief of the #77 Furniture Row Racing entry driven by Erik Jones for the Watkins Glen 355 and Pure Michigan 400 events.

He has been working on the Truex Jr. car this season which currently sits second in the standings.

While Furniture Row Racing has operated a technical alliance with JGR, the Melbourne native is excited to be joining the full multiple championship winning JGR outfit.

“Definitely it is exciting. It is arguably the top team in NASCAR over the last 10-15 years. There are some great people there,” Small told Speedcafe.com.

“Everything they have got planned for the future seems good. It is really good for my short term and long term future plans. I’m happy to be there.

“We have been technical partners with JGR (Joe Gibbs Racing) with the team I’m working with right now so it is good to stay with that group of people.

“There are five or six people from Furniture Row that are going to head across so it will keep the continuity going, so it won’t be like starting from scratch.”

Small still regularly watches Supercars around his busy NASCAR schedule and has stayed in contact with Mark Winterbottom, who he engineered to a Supercheap Auto Bathurst 1000 win in 2013.

He is also aware of the preliminary talks between Supercars and NASCAR regarding the possibility of a future race on the Gold Coast.

“That would be exciting but I don’t know about the likelihood of it happening, but talking about it is great,” he added.

“The cars have evolved a lot more than back in the 1990s when my dad took NASCARs up to the Gold Coast. It would be interesting.”

The NASCAR Cup schedule continues this weekend with the penultimate round of the series in Phoenix.