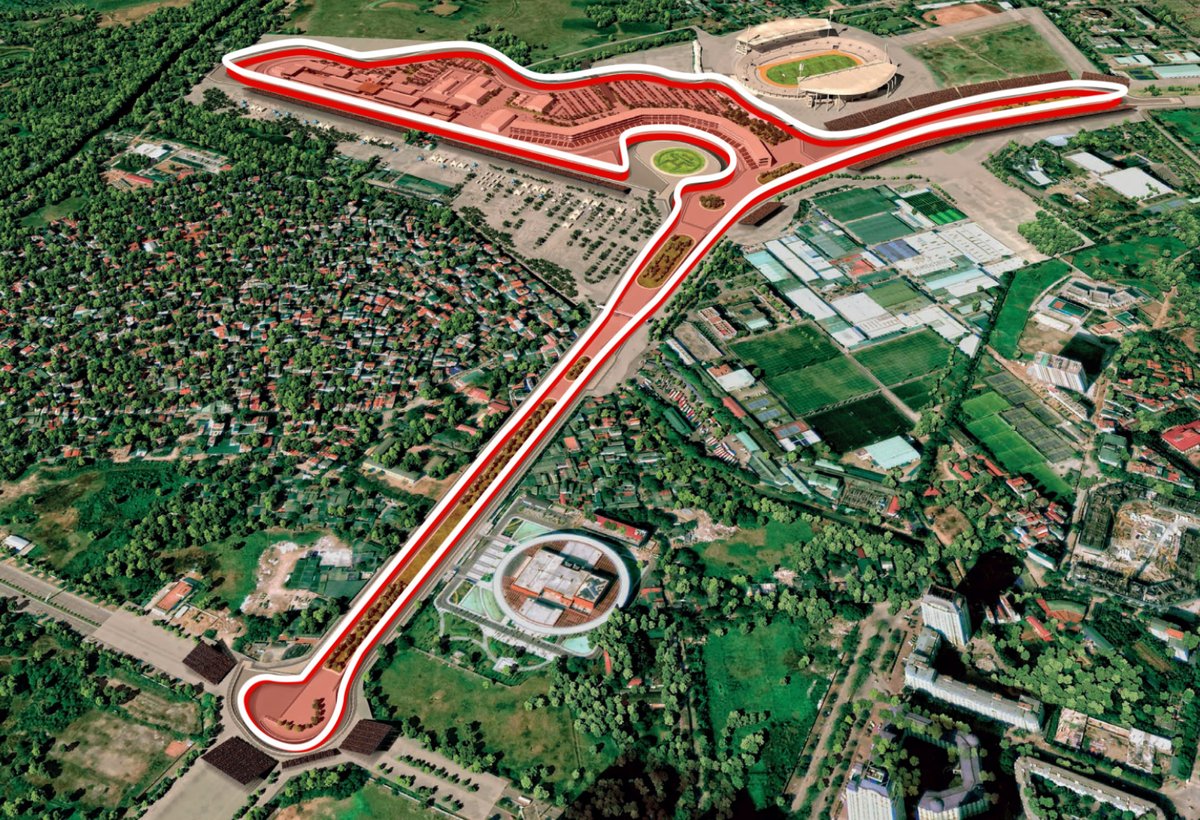 Formula 1 has announced that a Vietnamese Grand Prix will feature on the calendar from 2020.

To be held on the streets of Hanoi, the first round will take place in April under a multi-year deal with promoter Vingroup.

Hanoi is the first new venue signed to F1 since Liberty bought the championship in January 2017.

The Tilke-designed circuit will be a 5.565km long and of semi-permanent construction, with the pit lane and surrounds to be purpose-built but forming a public road thereafter.

According to F1, the anti-clockwise layout borrows a number of elements from existing venues.

The first two corners are reminiscent of those at the Nurburgring, Turns 12 to 15 are similar to the run from Sainte Devote to Massenet, and Turns 16 to 19 a likeness to Suzuka’s Esses.

There is also a 1.5km section of nearly straight track, roughly perpendicular to the main straight, which culminates in a speed trap where cars are expected to hit 335km/h.

Vietnam brings the number F1 host countries in the southeast Asian region back to four, alongside China, Japan, and Singapore.

“We are delighted to announce that Hanoi will host a Formula 1 Grand Prix,” said F1 CEO Chase Carey.

“Since we became involved in this sport in 2017, we have talked about developing new destination cities to broaden the appeal of Formula 1 and the Vietnamese Grand Prix is a realisation of that ambition.

“We are thrilled to be here in Hanoi, one of the most exciting cities in the world right now with such a rich history and an incredible future ahead of it.

“This is the perfect formula for Grand Prix racing and I look forward to this becoming a real highlight of the F1 calendar.”

City of Hanoi Chairman Nguyen Duc Chung said, “We are proud to be hosting the Formula 1 Vietnamese Grand Prix, and showcasing the city of Hanoi to the world with its special combination of ancient and modern beauty from 2020.

“It’s a further demonstration of Vietnam’s ability, as one of the fastest growing economies in the world to host events on a global scale and attract tourism to the country.

“It provides an opportunity for inward investment to Vietnam and importantly to bring the exciting wheel to wheel racing of Formula 1 to the people of Vietnam.”

Vingroup is a Vietnamese conglomerate with a strong focus on property development, but which also owns the fledgling VinFast car brand.

“We are excited to see that our work with Formula 1 to secure this deal has finally come to fruition,” said company CEO Nguyen Viet Quang.

“An essential part of this collaboration has been making sure that we not only showcase the city of Hanoi but also deliver an exciting race for Formula 1 fans in Vietnam and around the world.

“With the mission of ‘a better life for Vietnamese people’, Vingroup wants to bring this race to Vietnam because of the general benefits to the society such as more jobs will be created, the infrastructure of Hanoi will be upgraded, and other bigger worldwide events will be encouraged to take place in Vietnam.

“For Vingroup individually, through the F1 racing event, we are going to proclaim the first Vietnamese car manufacturer, VinFast, to millions of audiences in the world.”

The event will not receive government funding, according to Singaporean newspaper The Straits Times.