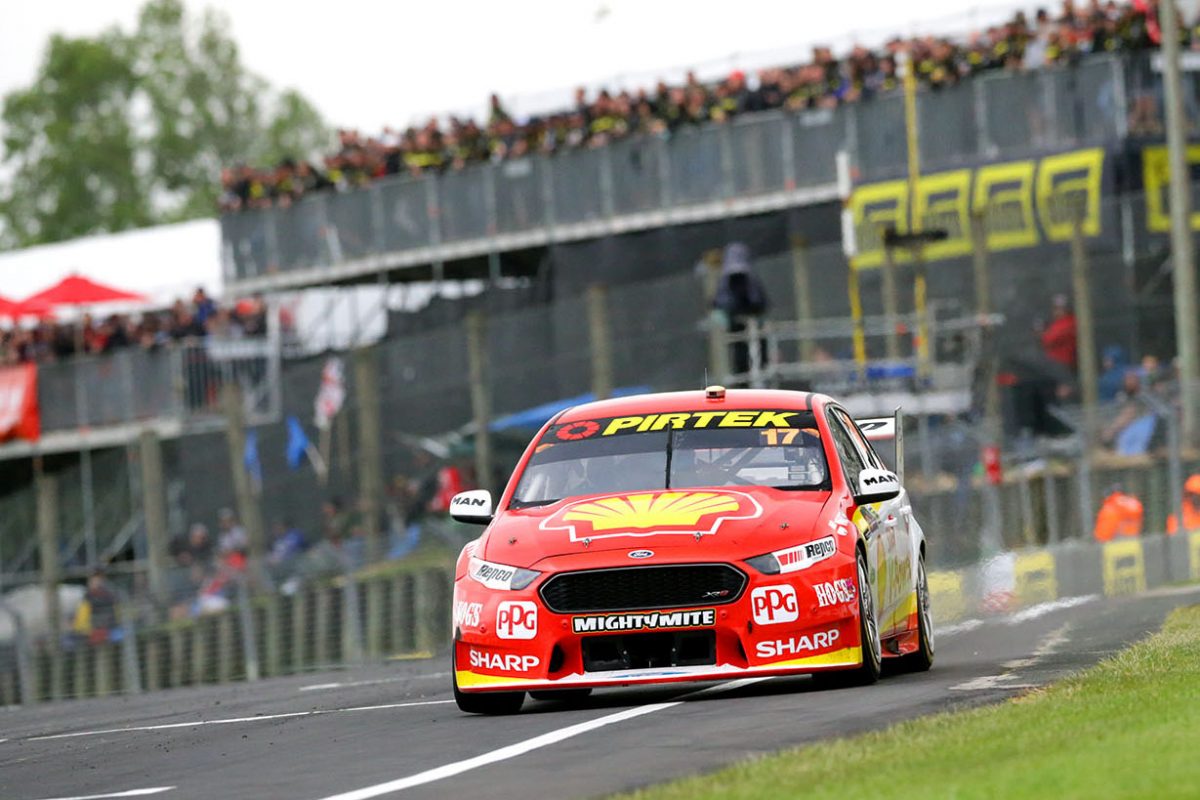 Scott McLaughlin has won Race 29 of the Supercars Championship at Pukekohe as Jamie Whincup handed over second position to team-mate Shane van Gisbergen on the final lap.

McLaughlin and Whincup ran virtually nose-to-tail for the final four laps until Triple Eight called off the chase as they ran down the back straight on Lap 70, effectively giving van Gisbergen another nine points towards his tally.

The outcome reverses out the effect of the results of 24 hours earlier, meaning that McLaughlin will take a 14-point lead to Newcastle in just under three weeks from now.

McLaughlin had taken the lead from Whincup in the second pit stop cycle while an earlier pit stop mistake from van Gisbergen’s crew left him a few positions behind, before the 2016 champion drove back up to a position in which he could inherit the runner-up spot.

“I’ve got to choose my words wisely because I’m going to swear probably; I’ll pull it in,” said an exhilarated McLaughlin, who also won the Jason Richards Trophy, shortly after stepped out of his car.

“Unreal; immense pressure from Jamie, well done to him.

“All these fans, to win in front of my home crowd … I haven’t won here since 2013. Thank you, means so much. Any win at home in New Zealand is a great win (and) this one is the best.

“(I’m) So proud of the team, the guys, they stood behind me no matter what.

“Mum and Dad are here, Nanna is here; she’ll be pumped with that, she hasn’t seen me win here in a while.

“I’ve got to go see these boys,” he added, referring to his waiting crew, before quipping, “but I’ve left Shane enough room to park…”

Van Gisbergen lamented not only the mistake in the pits, but a set-up change to his car.

“We just tweaked it the wrong way,” he admitted.

“That was a shame and just didn’t get it right myself. The JR Trophy, that’s a huge privilege so congrats to Scotty and his team… can’t think of a better guy to win it.

“Tough day for us, I enjoyed my weekend, and I’ll come back in a couple of weeks and have another go.

“This weekend has been amazing for our sport, two Kiwis and I’m proud to be a part of it.”

Whincup had walked away well from Armor All Pole Position as McLaughlin wasted no time in moving across from the outside of the front row to cover van Gisbergen, who started third.

The #1 Red Bull HRT ZB Commodore led by just under a second by the time Whincup pitted at the end of Lap 5, leaving McLaughlin’s #17 Shell V-Power FGX Falcon in the lead of the motor race and van Gisbergen around two seconds behind.

McLaughlin soon closed in on those who had already pitted and lost almost a second’s margin in the space of a four-lap period before he was called into the lane on Lap 13.

Van Gisbergen waited another two laps and his pit stop was costly, as Car #97 was dropped with a jack stand still underneath it after a tweak to the rear end of the ZB Commodore.

He got back into the fast lane just ahead of the other DJR Team Penske Ford of Fabian Coulthard (#12 FGX Falcon), who pitted at the same time, and was eighth once the first pit cycle had been completed after Lap 19.

The Saturday race winner, who took on around 63 litres of the 120-litre fuel mandate, then made light work of James Courtney (#25 Boost Mobile ZB Commodore) and Mark Winterbottom (#5 The Bottle-O FGX Falcon) in the next few laps.

Whincup, meanwhile, was around 4.4s clear of McLaughlin at the head of the field, but had reportedly taken on around 37 litres of fuel versus #17’s 46 litres in their respective first pit stops.

The Kiwi managed to get that deficit to about 3.8s before it crept back up to a neat four when Whincup took his second pit stop at the end of 34.

Importantly, McLaughlin swept around the outside of Car #1 as Whincup re-entered the circuit, in 12th position but the first of those who were fuelled to the end.

McLaughlin pitted at the end of Lap 38 and got out just ahead of Whincup but faced a huge task to stay there.

He barely hung on through the Turn 2/Turn 3/Turn 4 complex on cold tyres, then ran wide at Turn 5 when he pinched a brake, but mid-tracked Car #17 into the Hairpin to finally stave Whincup off.

Van Gisbergen pitted from the lead with 23 of 70 laps remaining and rejoined in fifth, nominally and effectively, 12 seconds from the lead which was by then held by McLaughlin.

Craig Lowndes (#888 National Storage ZB Commodore) was fourth at that stage and granted his team-mate easy passage down the inside at the Hairpin on Lap 56.

Van Gisbergen wasted no time hunting down third-placed David Reynolds (#9 Penrite ZB Commodore) and made a committed pass at the same corner on Lap 60, despite some resistance from the Erebus driver.

While all that was going on, McLaughlin got around 1.5s clear before Whincup started to reel him back in, slightly older tyres notwithstanding.

McLaughlin appeared to try and respond but they were nearly nose-to-tail on Lap 67, at which time Whincup had half a look at the Hairpin.

He tried again two laps later but wasn’t close enough to get a nose down the inside, and once McLaughlin got off Turn 4 on the final lap, that was that.

Van Gisbergen had been over 10 seconds behind the top two but duly strolled past, while Lowndes made for a Triple Eight two-three-four, ahead of Reynolds.

“Full congratulations to Car 17, Scotty drove awesome, and teamwork as well… they were lightning in the stops,” said Whincup.

“I thought we had him, four seconds up the road and we had one second less of fuel, but they jumped us in the second stops.

“Happy to have a double podium today.”

The latter had the save of the day when Cameron Waters (#6 Monster Energy FGX Falcon) got stuck into the rear corner of the #8 Coregas ZB Commodore going through the Turn 11 sweep on Lap 42.

Percat caught a huge slide for the loss of only two positions, as Waters and Garth Tander (#33 Wilson Security GRM ZB Commodore) got by, the latter of whom he re-passed within half a lap.

The 2018 Virgin Australia Supercars Championship will be decided at the Coates Hire Newcastle 500 on November 23-25.