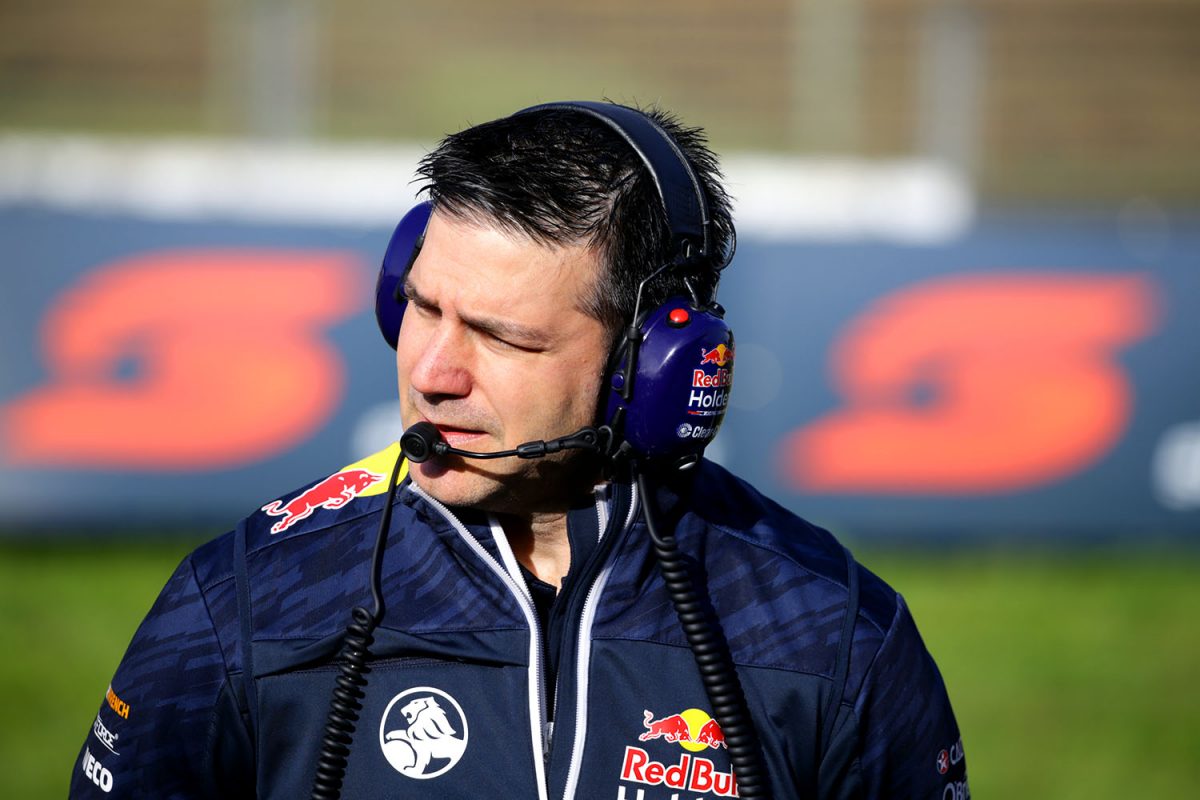 Triple Eight team manager Mark Dutton has lamented a conservative approach to Race 29 of the Supercars Championship at Pukekohe which was won by DJR Team Penske’s Scott McLaughlin.

The Shell V-Power Racing pilot took the lead through the second pit stop cycle and saw off a challenge from Jamie Whincup, who slowed on the final lap due to what was ostensibly a shortage of fuel but also allowed Shane van Gisbergen to finish runner-up to his championship rival.

The result, which neatly reversed out the small inroads which van Gisbergen made on McLaughlin a day earlier, was a somewhat surprising one given the advantage which Whincup seemed to have as they approached the halfway point of the 70-lap race.

Car #1 had held a lead of around four seconds over McLaughlin’s Car #17 which was thought to have been more than enough to make up for the slightly longer fuel fill which Whincup required in his second pit stop.

Whincup did make that stop on Lap 34 and emerged just behind McLaughlin on the road to temporarily lose a lap, before the Kiwi resumed just ahead of the #1 Red Bull Holden after his own second pit stop on Lap 38.

From there, he gapped Whincup and had enough pace to hold on to first position in the latter laps, ensuring he was the only man who stood between an all-Triple Eight podium as Craig Lowndes finished fourth.

Dutton blamed himself as he intimated that an important victory got away from the Banyo squad.

“Saturday, I think we ticked more boxes than we did today,” he declared in reference to van Gisbergen’s controversial win in Race 28 at the ITM Auckland SuperSprint.

“Today we definitely tuned up the cars, fast cars, but we were a little bit conservative with some of our strategic calls – that’s on me – and it let us down today.

“The cars were still there or thereabouts; yeah, we finished second, third, and fourth, but some of the strategic calls could have been better.”

A particularly costly moment was van Gisbergen’s first pit stop, when Car #97 was dropped with an incompressible stand still underneath it after a set-up adjustment in the rear end.

The car had to be raised again, costing van Gisbergen several seconds, which saw him sit eighth after the first set of pit stops having run third before then.

“Once again, it comes back to the conservativeness,” explained Dutton.

“You don’t actually have to put that incompressible stand in to do that specific change, but we went conservative, we put what we dubbed safety first.

“That said, the crew are so good at it, we probably shouldn’t have been as conservative and just not run the stands.”

Whincup gave chase to McLaughlin in the final 20 laps and would have cost the championship leader 12 points had he been able to get by.

Having appeared unable to do so, he slowed down the back straight on the final lap and van Gisbergen marched past.

The outgoing champion would not be drawn on the topic of team orders, instead expressing a similar refrain to Dutton although he was unsure how the race was lost.

“I’m not overly happy that we didn’t win,” replied Whincup when asked about handing over second position.

“We should have won that race, we were four-and-a-half seconds up the road in the middle there with a second more of fuel (to fill) and somehow (McLaughlin) came out in front of us.

“We don’t know what happened there, we don’t exactly know where it is, but I thought we were a good chance to win that race and we didn’t win it, so I’m disappointed.

“Car #17 did an amazing job, Scotty did a great job, they were aggressive and they had a fast car and won the race.

“We’re not devastated with ourselves, but congratulations (to McLaughlin, DJRTP), but we strive to be market leaders so we’ll have a look at the numbers and work out how we can do a better job next time.”

When pressed on the final lap pass, he declared, “Second to 25th is no difference.

“We went out there to win the race and we weren’t quick enough, so that was disappointing.”

But for a mass of points penalties in Newcastle, Whincup’s title defence came to an end in New Zealand and he is now 481 points behind McLaughlin.

Just 14 points separate McLaughlin and van Gisbergen with 300 on offer across the two races of the Coates Hire Newcastle 500, on November 23-25.