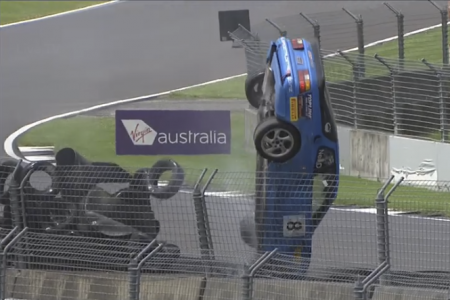 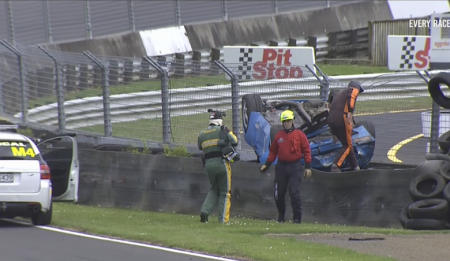 A NZ Porsche driver walked away from a frightening crash in the final race of the weekend at the ITM Auckland SuperSprint.

Neil Dewar was bumped into the tyre barriers late in the race after Sean Kirkpatrick, in a faster car, dived down the inside at Turn 10.

The 944 Porsche speared off into the tyres, violently flipping and nearly clearing the catch fence which separates pit entry and the race track before coming to rest on its roof.

Medical crews were quick on the scene, with television pictures showing Dewar climbing from his car shortly after the crash.

The incident occurred on the final lap of the race, with race control immediately throwing a red flag.

Michael Neville was leading, under immense pressure from Brian McGovern, and was ultimately classified as the race winner.

The tyre barrier has since been repaired after it was significantly compromised in the hit.