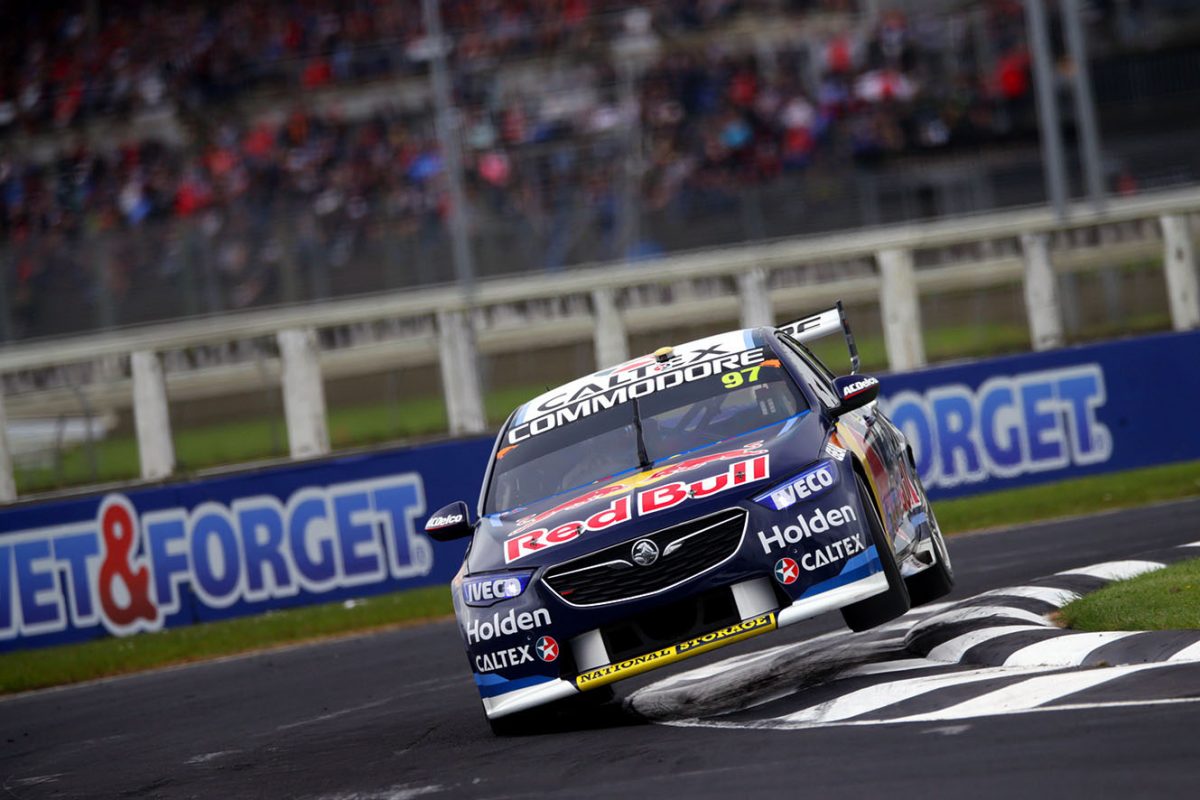 Shane van Gisbergen has beaten Scott McLaughlin in Race 28 at Pukekohe despite a time penalty but has another sanction hanging over his head for a possible pit stop infringement.

Van Gisbergen smacked the rear of McLaughlin’s Ford at the Hairpin with 10 laps remaining and went on to make a huge move down the inside of Car #17 as they swept back onto the main straight.

The contact had occurred as the Red Bull Holden Racing Team pilot attempted to criss-cross McLaughlin after he had parked the Shell V-Power FGX Falcon on the inside of the braking zone, and stewards deemed it a driving infringement.

A five-second penalty was issued just over five laps later, at which time the #97 ZB Commodore was around three seconds to the good.

Van Gisbergen continued to pull away and had 5.0959s on McLaughlin with a lap remaining.

Despite dropping a wheel of and nearly swapping ends at the last corner of the race, he increased his margin on Lap 70 and took the chequered flag 5.5119s ahead, meaning that he now trails McLaughlin by two points in the title race.

However, the 2016 champion is subject to a post-race investigation for spinning wheels during his second pit stop.

Race Control issued notification of the investigation around the Lap 50 mark but took until near the end of the race, after determining the driving infringement, to decide to hold off a call until after the first race of the ITM Auckland SuperSprint.

“I hope you guys enjoyed that, that was one of the coolest races I’ve ever had,” said van Gisbergen after exiting his car.

“That was so cool, hopefully we can put on a good show tomorrow and hopefully Kiwi one-two.

“The pass with Scotty, he jammed it up quite nice and I just touched the back of him but good respect through the last couple of corners side-by-side, and cleared him up over the hill.”

McLaughlin would not be drawn on the hit he copped from his compatriot.

“We’ll come back tomorrow and give them a good run for their money.”

On the race in general, he described it as “full on”.

“I got a pretty good start, raced really hard all race,” he added.

“Obviously there was a bit of tit for tat there. It was great racing around the back there, side-by-side, plenty of respect. You go hard.

“Gutted we didn’t get the win at the end of the day but we gave it a shot in strategy. Hopefully Ford fans can come back tomorrow and give these Opels (ZB Commodore) a run.”

The post-race investigation adds more drama to what was a fascinating race as the two title combatants and New Zealand heroes battled each other on the track, in a strategy game, and then on the track again.

McLaughlin led the field off the grid from Armor All Pole Position while van Gisbergen hung tough on the outside and wrested second position back from David Reynolds into Turn 2 when it looked like he had lost it.

The Ford driver gapped his factory Holden rival to the tune of a bit over a second in the opening laps before losing a little of that margin as he came up on Mark Winterbottom (#5 The Bottle-O FGX Falcon), who had pitted from midfield on Lap 1. 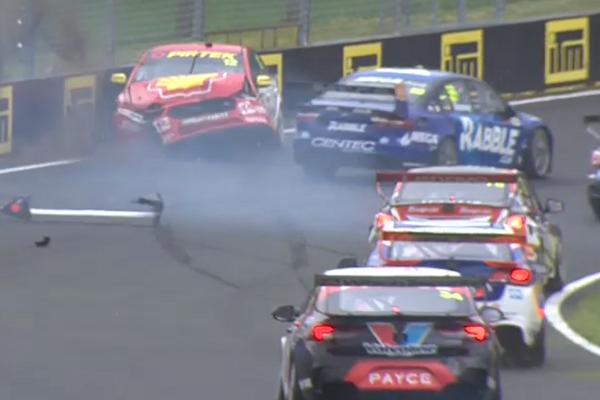 A Safety Car was called on Lap 8 after McLaughlin’s DJR Team Penske team-mate Fabian Coulthard (#12 FGX Falcon) clouted the wall at the final corner of the circuit.

He had been in a battle with Lee Holdsworth and copped a touch from the #18 Preston Hire Racing ZB Commodore as he rounded Turn 10, slewing into the tyre wall on driver’s right before rebounding across the track and wearing a hard hit with the concrete.

Holdsworth, however, had been given a nudge by Richie Stanaway as he got to the apex and the #56 Rabble.Club FGX Falcon was issued a drive-through with further investigation post-race.

The presence of light rain at the time presented a dilemma to teams but all opted to switch to another set of slicks when they responded to the Safety Car by filing into the pit lane.

James Courtney (#25 Boost Mobile ZB Commodore), who pitted with Winterbottom but took far less fuel than the front-runners, took over the lead from McLaughlin, van Gisbergen, Chaz Mostert, and David Reynolds, while Jamie Whincup fell from fifth to 17th due to the stack.

Van Gisbergen was immediately needling the rear of Car #17 when the race restarted on Lap 15 and made the move at the Hairpin seven laps later.

He stalked Courtney for several laps before throwing it down the inside at the same corner on Lap 31, only for Courtney to make a superior exit and take the position back through the sweep onto the main straight.

As that was going on, McLaughlin, who had taken an extra four litres relative to van Gisbergen at his first pit stop, was into the lane a second time took his second pit stop.

Van Gisbergen had another crack at Car #25 on Lap 35 and this time he forced Courtney to prop mid-corner, which allowed him to make the move stick.

Despite giving up lap speed to McLaughlin while he ran on older tyres, van Gisbergen missed one instruction to pit on Lap 45.

On Lap 46, as he tailed Reynolds on the road, he was initially told by Grant McPherson to “Pit or pass” before being given the firmer instruction of “Pit; no option,” and duly peeled off the race track.

Van Gisbergen barely hung on to second position when he rejoined as Mostert tore around the first sweeper, but faced a deficit of 4.2s by the end of the lap.

As race control advised that Car #97 was under investigation for spinning wheels in the pits, he started to claw back the gap to McLaughlin and was under the red and white Ford’s rear wing on Lap 60, setting up the controversial pass.

Mostert was all but forgotten as he brought the #55 Supercheap Auto FGX Falcon to a second straight podium, ahead of Reynolds (#9 Erebus Penrite ZB Commodore).

Despite being spun early on, Craig Lowndes (#888 National Storage ZB Commodore) climbed from 18th on the grid to finish 11th, two positions ahead of Winterbottom.

The field is next on-track at Pukekohe Park Raceway for Armor All Qualifying for Race 29 tomorrow at 1105 local time/0905 AEDT.