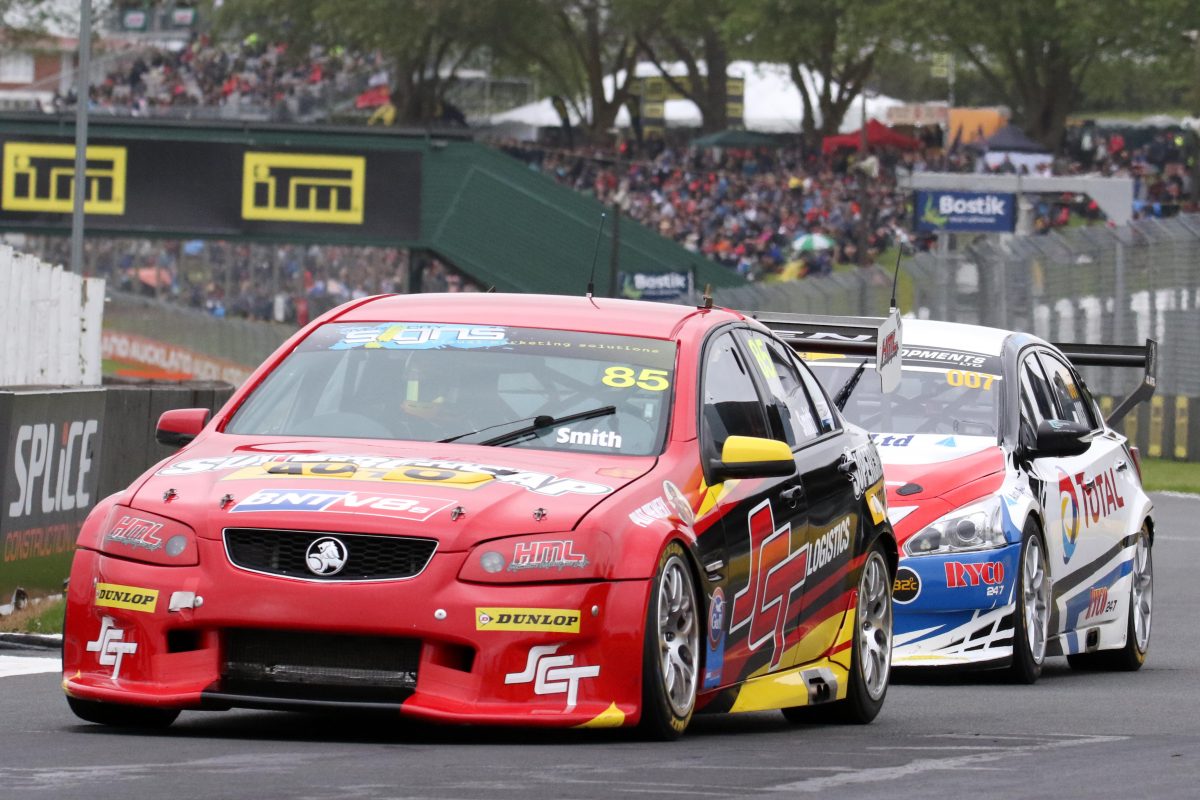 Jack Smith has won the opening race of the 2018/19 BNT V8s season at Pukekohe Park after a mistake from initial race leader Nick Ross, who went on to finish second.

Ross made the best of the rolling start from the outside of the front row and the #007 Nissan Altima led the Hamilton Motorsports Commodores of Smith and Lance Hughes through the opening corners.

Brenton Grove sailed off at Turn 5 while attempting to take fourth position from Brad Lathrope on the opening lap, dropping behind Chelsea Herbert, before they both managed to pass Lathrope at the Hairpin on Lap 3.

The Safety Car appeared on Lap 6 as a result of a steering arm failure pitching Invitational class driver Matt Griffin’s #177 BMW GTR E46 off the road at Turn 1, wiping out a margin of over 10 seconds between the top three and Grove.

Ross came under pressure from Smith in the laps after the restart and locked the rears of the Concept Motorsport entry at Turn 5 on Lap 12, running down the old section of the back straight and ceding the position to Car #85.

Smith stretched the gap with back-to-back fastest laps on his way to victory, ahead of Ross and Car #84 of Hughes, while Grove was fourth in the #10 Richards Team Motorsport Camry.

John De Veth, who was second-fastest outright in qualifying, won the Invitational class in fifth on the road in his #23 Holden Commodore, ahead of Class One debutant Herbert (#62 Richards Team Motorsport Camry).

Lathrope was luckless after the restart as he was turned around at Turn 6 by Matt Tubbs and pushed off by Scott Taylor at Turn 5 on consecutive laps before finishing 10th in the #73 Brad Lathrope Racing Ford Falcon. 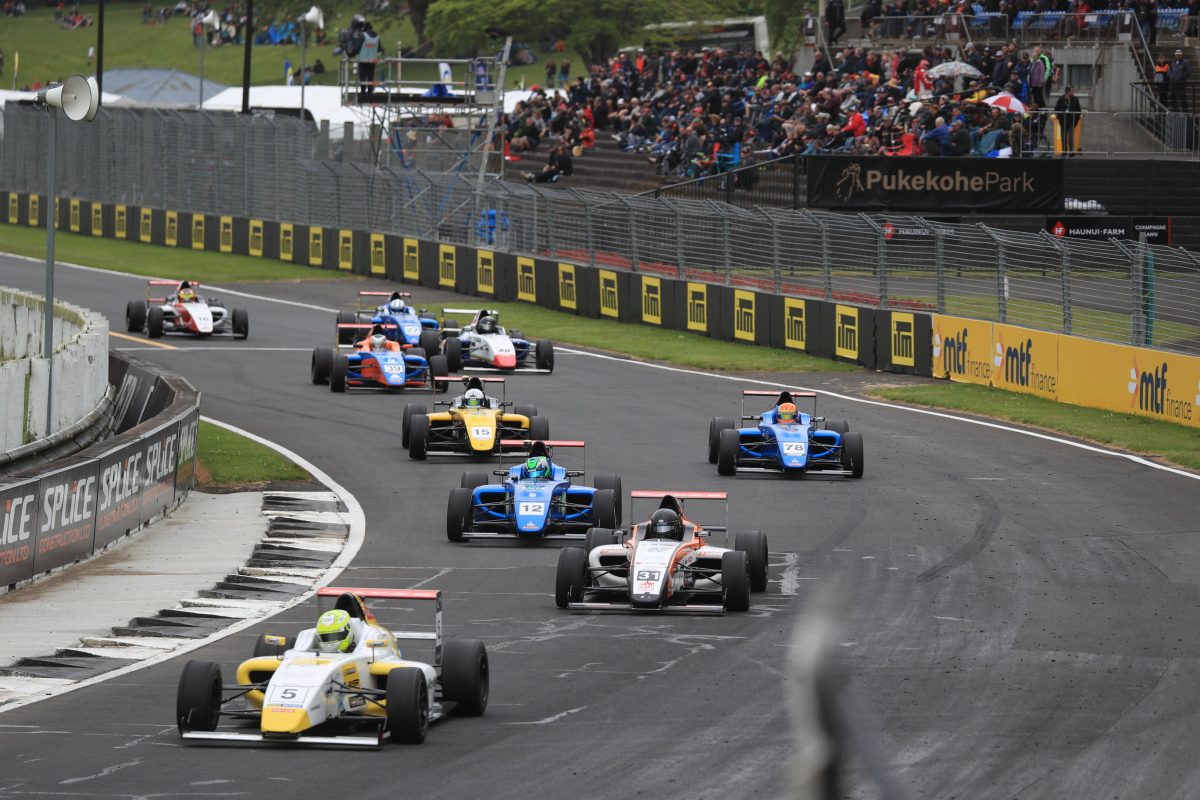 Ojeda needed to finish ahead of Suhle to inherit an unassailable lead for the final two races of the season finale at Pukekohe.

Suhle was on a charge from lights out, maintaining a sizeable gap through the opening stages.

Josh Smith spun into the tyre wall at Turn 2 on Lap 6, but was able to get back going again.

As the race headed into the final three laps, Ojeda began to reel Suhle in, with the pair running side by side down the back straight on the last lap.

Suhle ran deep at Turn 5, allowing Ojeda the switchback, but Suhle ended up with the inside line for the Hairpin and nosed ahead.

Ojeda gave it everything he had and tried to pull alongside on the run through the final two corners, but it was Suhle who took the chequered flag first by 0.89s.

Connor Adam won the opening race of the 2018/19 Toyota 86 Championship.

From pole, Adam cleared off early in the 12 lap encounter, crossing the line 0.7s ahead of Jordan Baldwin.

Jaden Ransley held onto third spot despite being pressured right to the flag by Callum Hedge, who came from the rear of the field to fourth following a crash in qualifying.

Earlier, Ransley tried a move on Baldwin on Lap 9 as the pair ran side by side but the former could not get past and settled back into third.

The only incident of the race came before the halfway mark, when Ngatoa bumped Peter Vodanovich off the road, with the latter slapping the concrete wall on the outside of the track before limping back to the pits.

Ken Smith took out both of the day’s races in Formula 5000, overcoming several challenges from Leroy Stevenson at the head of the field.

Greasy conditions greeted the field for Race 1 and a handful of drivers went spinning on the opening lap, struggling to get to grips with the track conditions.

Stevenson began to close up on Smith, with the pair duelling between traffic in the closing stages, but it was ultimately the 76-year old Kiwi legend who grabbed the win.

At the start of Race 2, Stevenson attempted to hold around the outside of Turn 1 but Smith prevailed and opened up an early lead.

On Lap 7, Stevenson locked up at the hairpin and made a trip through the gravel, having to ultimately retire the car to the pits from second spot.

The final race of the weekend starts on Sunday at 1245 local time.

Dean Perkins won Race 1 in the Central Muscle Cars while Trevor Swan held on to the top spot in Race 2.

Andrew Fogg spun at Turn 2 in the first race, making contact with Andrew Anderson upon rejoining and coming to a halt, meaning the race would finish under Safety Car.

Perkins greeted the chequered flag first ahead of John Midgley and Craig Boote.

However, in Race 2, Perkins was only able to race his way through to 17th after the handicap start saw him set off from outside the top 30.

Michael Neville was victorious in the opening two races of the weekend for the Pirelli Porsche Championship.

Rain caused an odd start to Race 1, with Neville opting to pit for wet tyres on the formation lap before being allowed to take up his grid spot on the front row while many others were still on slicks.

He managed to streak off and comfortably take out the win as Brian McGovern and Conal Dempsey rounded out the top three.

Again in the second encounter, Neville shot off at the start and built a cushion between himself and McGovern.

With only a handful of laps to go, the Safety Car was brought out after Matthew Burton smacked into the pit wall on the exit of the final corner.

The race would end under yellow, with Neville taking the flag from McGovern and Dempsey.

Race 3 will see the green flag on Sunday at 1215 local time.