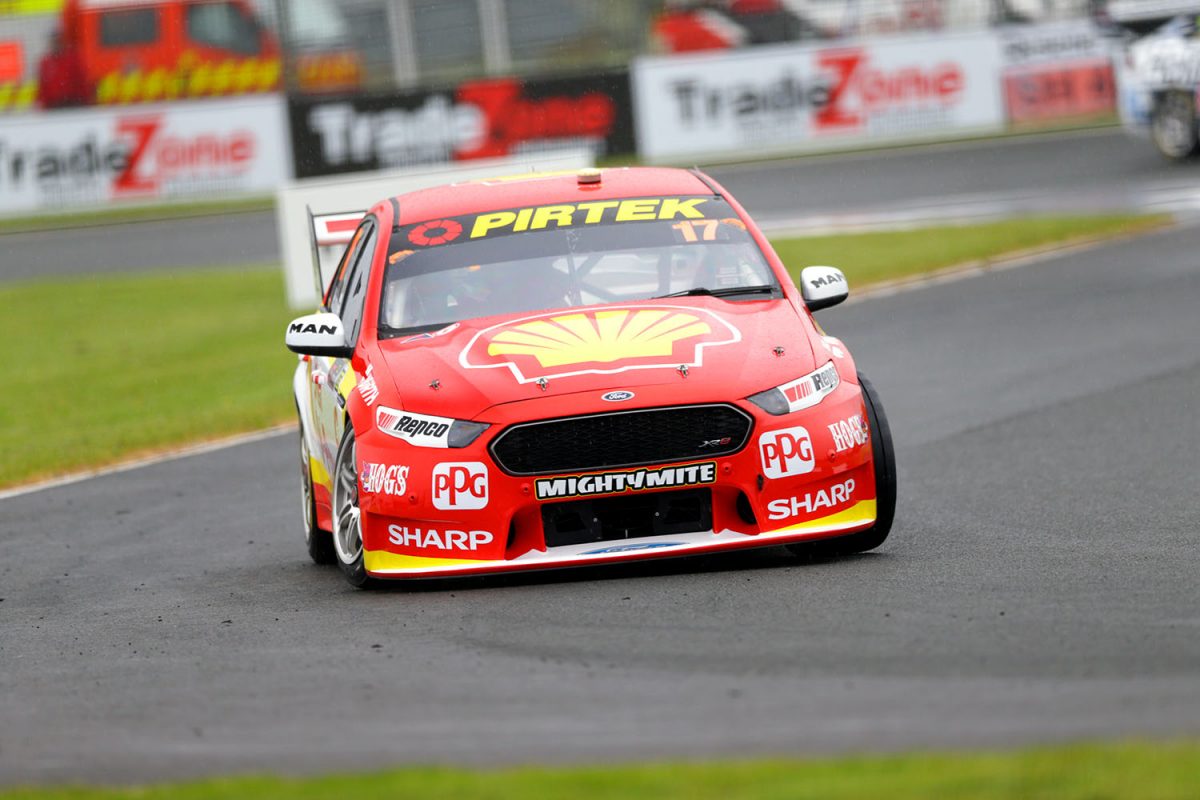 Championship combatants Scott McLaughlin and Shane van Gisbergen will start from the front row for the ITM Auckland SuperSprint opener after gallant efforts in Armor All Qualifying.

McLaughlin made an untidy start to the 20-minute session at Pukekohe Park Raceway, running off the road at the Hairpin on his second flying lap.

Removal of some of the blanking from the #17 Shell V-Power FGX Falcon made it less pointy, allowing McLaughlin to reel off back-to-back fastest laps during his second run, and a 1:02.5708s proved good enough.

Light rain began falling as the field filed back onto the circuit after a mid-session red flag, but David Reynolds used roaded fronts to haul the #9 Erebus Penrite ZB Commodore from eighth to second, nearly a quarter of a second away from McLaughlin.

Van Gisbergen improved on that run, despite squirming into the Hairpin, but was still fourth-fastest and set to start on the outside of Chaz Mostert (#55 Supercheap Auto FGX Falcon).

It appeared that it would get not better for van Gisbergen when his Red Bull Holden Racing Team team-mate Jamie Whincup (#1 ZB Commodore) ran up the escape road, having just crept up to fifth, and Nick Percat (#8 Coregas ZB Commodore) slid off and hit the tyre wall at Turn 4.

However, both van Gisbergen and Percat had another crack in the final two minutes and were duly rewarded when the former laid down a 1:02.6880s in the #97 ZB Commodore and the latter elevated himself from 16th to sixth.

The pole is the Christchurch-born McLaughlin’s 13th of 2018.

“It’s pretty cool, fist pumping there and cheering not looking like an idiot,” he said.

“It’s nice, car is awesome, got in there just before the rain, feel like we’ve made an improvement.

“Gave myself a kick up the arse yesterday (after a practice crash) and then I thought, ‘Well these guys gave me an awesome car, made it straight’ and for everyone at Shell V-Power Racing this is all for them.

“Me and Shane have been battling all year and I knew he was going to come back pretty hard there, but awesome lap by him there in the end. It’s going to be an awesome battle in this race here and I’m just pumped for it.”

Van Gisbergen was in fact slightly disappointed with his effort, which sets up the all-New Zealand front row.

“I was a bit of a softy at the last corner, I saw the big drops of rain and I backed out,” he admitted.

“That’s cool, that’s how it should be, two guys at the front, it’s going to be a good race.”

The second row will be Reynolds and Mostert, while Whincup remained fifth and will start alongside Percat.

Reynolds, however, also felt that he had more in him.

“Just disappointed at that last bit, we stuffed up the timing,” he explained.

“I was on my last set of tyres and I was about to start my lap and I got the chequered flag so it was a bit of a stuff up. I think we could have had a crack at pole.”

Row 6 will also be an all-Kiwi affair in Andre Heimgartner (#7 Plus Fitness Nissan Altima) and Richie Stanaway (#56 Rabble.Club FGX Falcon), while Fabian Coulthard (#12 DJR Team Penske FGX Falcon) is back in 19th.

He will, however, start only one position behind Craig Lowndes (#888 National Storage ZB Commodore).

Simona de Silvestro brings up the rear of the 26-car field after getting the #78 Harvey Norman Nissan Altima snagged in the Turn 4 tyre wall and bringing about the red flag.

Results: Armor All Qualifying for Race 28