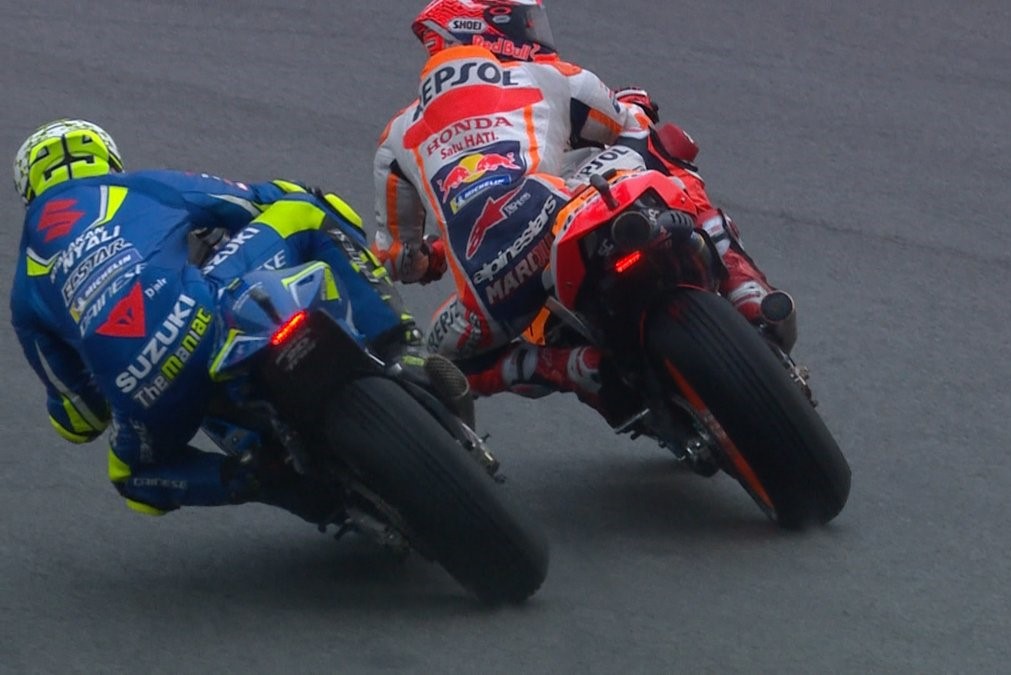 The incident for which Marc Marquez was penalised pic: MotoGP Twitter

Marc Marquez has been hit with a six-position grid penalty for getting in the way of Andrea Iannone during qualifying for the Malaysian MotoGP.

Marquez, who finished over half a second faster than the rest in a weather-affected qualifying process at Sepang, was riding slowly on an out lap when the Suzuki Ecstar rider came up on him at Turn 9.

Iannone had to slow and expressed his displeasure by gesturing towards the Repsol Honda rider on-track.

Marquez sought out Iannone as they took their practice starts at the end of the session to apologise, which the Italian appeared to have accepted by giving the Spaniard a ‘thumbs up’.

“On 03 November 2018 at 17:08 during the MotoGP Q2 of the SHELL MALAYSIA MOTORCYCLE GRAND PRIX, at turn 9 you were found to be riding in an irresponsible manner being slow on the racing line and disturbing another rider,” read the official notification of sanction.

“This contravenes Article 1.21.2 of the FIM World Championship Grand Prix Regulations ‘Riders must ride in a responsible manner which does not cause danger to other competitors or participants, either on the track or in the pit lane.’”

The incident is virtually the same as that which cost Marquez a pole position start for the United States race in April, when he held up Maverick Viñales.

His punishment on this occasion is six positions rather than three due to the repeat nature of the infringement.

Jack Miller moves to the middle of Row 2, between fourth-placed Ducati factory rider Andrea Dovizioso and the other Pramac Ducati of Danilo Petrucci.

Race start is scheduled for 1600 AEDT on Sunday.