Marquez on pole despite crashing at wet Sepang

Marquez on pole despite crashing at wet Sepang 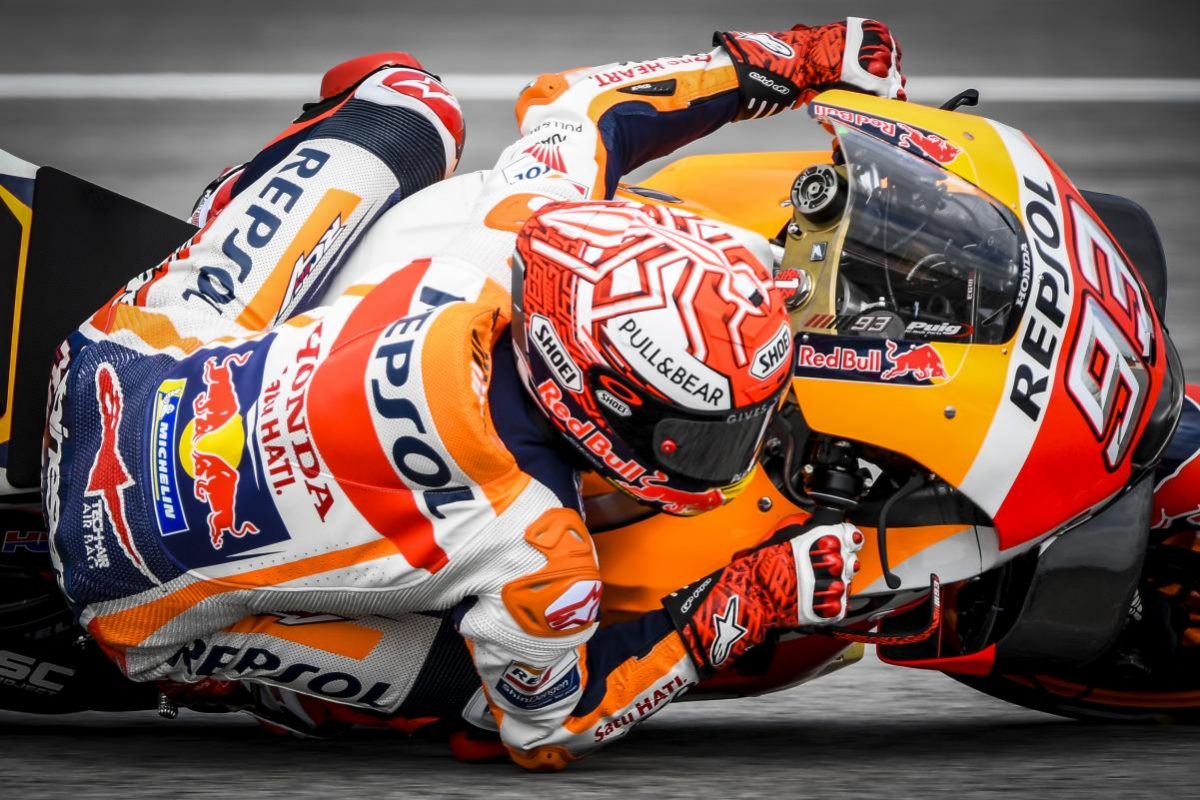 Marc Marquez has qualified on pole for the Malaysian MotoGP by more than half a second despite crashing midway through qualifying at a wet Sepang.

The 2018 world champion ended up 0.548s faster than Johann Zarco (Tech3 Yamaha) despite his fall, and they will be joined on the front row by Valentino Rossi (Movistar Yamaha).

Proceedings were interrupted for more than an hour due to rain, which was a shower in the latter stages of Free Practice 4 before progressing to a downpour which caused a red flag in the third minute of Qualifying 1.

As such, both parts of qualifying were completed on a damp track.

Danilo Petrucci was next best after the first runs, 1.264s slower than the #93 Repsol Honda, while Jack Miller made it both Pramac Ducatis in the top three.

Marquez crashed on his next lap and while he failed to improve on the only flyer he could fit into his second run, it mattered not.

Dovizioso looked likely to reclaim the place with his final lap but he went down at Turn 9.

Rossi brought the margin down to 0.848s but it was to be Zarco who would come around and earn a start from the middle of the front row.

“When I go out on wet in FP4, the feeling was not so good but then in quali we change a few things and improve a lot.

“Even when I crash, I wasn’t pushing a lot; it looks like (the track is) really sensitive, we see many crashes, so the most important (thing) is that we got pole position.

“We will see tomorrow because I think that on the dry set-up, in a dry race, our pace also is quite good.”

Miller leapfrogged his team-mate on his final lap and will line up on Row 2 on the outside of Iannone and Dovizioso.

Iannone and Marquez were seen remonstrating with each other late in the piece, perhaps due to the latter holding up the former while on an out lap.

The Spaniard crashed one of his Movistar Yamahas when he was among several caught out by the showers in FP4, then, having been fastest in practice, could only qualify 11th.

Aleix Espargaro (Gresini Aprilia), like Bautista, came through Q1 but crashed early in Q2 on his way to 12th.

Michele Pirro, who has stepped in for Jorge Lorenzo due to the three-time premier class champion’s continued wrist pain, looked like breaking into the second 15-minute stanza but made an error midway through his final lap and ultimately qualified 14th.

Jordi Torres joins Lorenzo on the sidelines after he was also a victim of the conditions in FP4, which appeared to have been exacerbated by a dearth of rain flags.

Torres, who has been racing for Avintia Ducati as a result of Tito Rabat’s Silverstone injuries, has been diagnosed with a fracture in the base of his left first metacarpal (bone which connects thumb to hand).

Race start has been brought forward by two hours to 1600 AEDT (Sunday) due to forecasts of adverse weather similar to that which struck during qualifying.