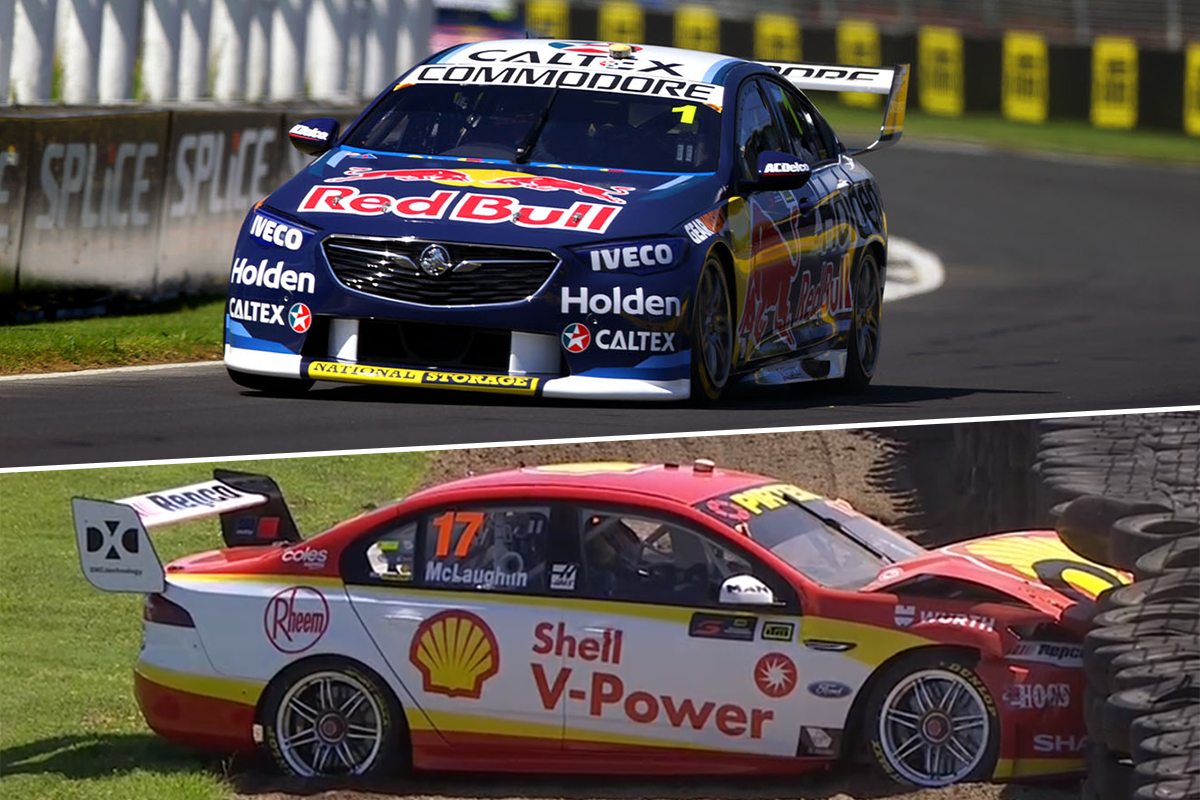 Jamie Whincup has gone fastest in Friday practice at the ITM Auckland SuperSprint while Scott McLaughlin crashed in the opening minutes of Practice 2.

McLaughlin, who set the pace in Practice 1, drew a red flag less than four minutes in when he lost control at the Turn 1/Turn 2/Turn 3 complex and fired off into the outside tyre wall.

The #17 Shell V-Power FGX Falcon was carried back to the pits on a flatbed and while it reportedly incurred no suspension damage, the creases on the chassis rail extensions sidelined it for the rest of the 40-minute session.

“(I was) Just trying to find a little bit more of a driving thing that I’ve been working on into there,” recounted McLaughlin.

“Just overstepped the mark, completely my fault, sorry to everyone at Shell V-Power Racing.

“(I’ve) Given them a whole lot of work that they didn’t need. I’ll give myself a big kick up the arse and come back tomorrow.”

The Kiwi, who was unhurt, explained that the crash was related to a brake locking issue with the DJR Team Penske Ford.

“We’ve been locking into there all run, so I’ve been running a little bit more brake bias since the start of that session,” he said.

“Just lost the rear braking into (Turn) 2 there, then just lost it and it was gone; passenger.”

McLaughlin’s was the first of three red flags during the afternoon hit-out for the Virgin Australia Supercars Championship field, ensuring that everyone else set their personal bests either at or very near the end of the session.

Whincup came up from sixth to clock a 1:02.6575s in the final minute in his #1 Red Bull HRT ZB Commodore and that time would not be beaten.

“Happy, happy. We had a program and we’ve stuck to it,” he said post-session.

“Not that eventful for us, we just got through our plan and did our thing and the car’s pretty quick.

“I haven’t driven this car before so it took a little bit of time to get used to it out the gate but now it feels like home,” he added regarding the switch to the original ZB which was set aside as a spare chassis and recalled for racing due to Paul Dumbrell’s Gold Coast crash.

“My car was good, good on old tyres and good on new tyres but still plenty of work for us. No doubt all the other guys will be saying the same thing”

Chaz Mostert (#55 Supercheap Auto FGX Falcon) in fourth and Richie Stanaway (#56 Rabble.Club FGX Falcon) in seventh made for three Tickford Fords near the top of the order.

Fabian Coulthard (#12 DJR Team Penske FGX Falcon) was 14th and while McLaughlin ended up 24th for the session with just one lap time in the books, his Practice 1 fast lap puts him 12th on combined times.

Todd Hazlewood brought out a red flag when the rear of his #35 Bigmate VF Commodore broke free at Turn 1 and he ran off the Pukekohe circuit at high speed.

However, the gravel trap ensured that he only lightly nudged the tyre wall and the rookie was able to drive back to the pits and eventually go for another flyer, albeit finishing on the bottom of the order.

Andre Heimgartner’s #7 Plus Fitness Nissan Altima caused the other interruption, minutes after McLaughlin’s, when its engine cut out at pit entry due to a sensor problem before he went 20th-fastest.