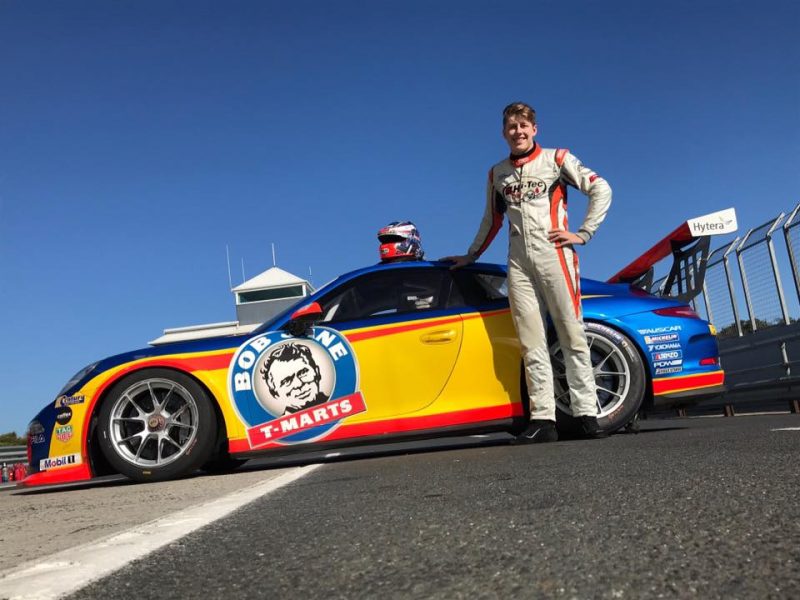 In 2018 Max Vidau stepped into the Porsche Michelin GT3 Cup Challenge series, establishing himself as one of its leading lights.

Speedcafe.com’s Mat Coch spoke with the race winner about his 2018 campaign, and what he hopes to achieve in future.

SPEEDCAFE: Looking back at the season, what was your first year in Porsche GT3 Cup Challenge like?

MAX VIDAU: 2018 wasn’t exactly the year I was looking for, I would say. A lot of mistakes were made just on the race track, I over drove the car a lot. But if you look at the positives, every race meet we were fastest, and if not fastest, not even a tenth off anywhere. That’s a positive side. I just over drove the car trying to get the results instead of focusing on each corner.

SPEEDCAFE: What was the highlight of the campaign?

VIDAU: Probably Round 1, at the first round at Tailem Bend. Obviously the first race event they’ve ever had there, I had lots of family and friends there, so to stand on the top step of the podium was pretty cool.

SPEEDCAFE: And the toughest moment?

VIDAU: It’d probably have to be when I was parked up in the wall at Phillip Island when the championship disappeared. I was sitting second, not very many points behind, and unfortunately stuck it in the wall and that was it.

SPEEDCAFE: Being so young, how do you deal with that disappointment and bounce back mentally?

VIDAU: I didn’t bounce back how I probably should have. I was very focused on getting race wins and getting the maximum amount of points I possibly could where I should have got back in the car and let the results come to me through driving the car well. So a lot of over driving, but Michael Ritter (team owner) and Mike Henry (engineer) helped me out with that and I think we got it better at the last round.

SPEEDCAFE: Would it be fair to say the lesson from 2018 is to trust yourself and your own ability more rather than trying to force it?

VIDAU: Yeah, probably a bit of that, and just understanding the car a bit more. Back when I first started in Formula Ford I was a bit like that; (I’d) just get on the wheel and try to create a lap time. Then, the year after, I matured and understood the car a lot better. So hopefully that’s the same with the Porsche next year. I understand everything a lot better and I feel more comfortable.

SPEEDCAFE: Where are you looking at racing next season; are you staying put or moving on to Carrera Cup?

VIDAU: Carrera Cup would be awesome to do. Obviously it’s a lot of money but the main plan at the moment is hopefully we can get back into GT3 Cup Challenge and go again.

SPEEDCAFE: What’s the rationale behind that decision, is it a case of trying to gain some more experience given you’re still so young?

VIDAU: Yeah, it’s definitely good just to learn everything around you; how the car reacts before you get into the main game of Carrera Cup and jump on TV and all the street circuits. It’s definitely good to feel confident in the car.

SPEEDCAFE: If money was no object would you move up, or would you still stay in GT3 Cup Challenge?

VIDAU: That’s a hard question, to be honest with you. I’d love to step up but I don’t want to make my debut into Carrera Cup too early and just run around the back. It’s probably a good thing to run another year of GT3 Cup and make sure I’m ready to jump in there.

SPEEDCAFE: Having been so competitive this season, next year you must be targeting the championship.

VIDAU: Yeah, definitely next year we’ll definitely be going for the championship. From the results we had this year, and the car speed, we should be right up there.

SPEEDCAFE: At 17 you’ve still got time on your side, but what are you looking to do longer term?

VIDAU: Obviously being such a young guy you don’t have to push forward straight away, you can have a learning year here and there. It’s good. If you look at everyone, say Jordan Love, he was 18 when he moved up. I’m only 17 at the moment so there’s no massive rush.

Obviously with the full Supercar thing, that would be an awesome experience to get into. Growing up I’ve always looked at Supercars as the main goal, but over the last couple years definitely the Porsche route has opened up and it’s opened my eyes a bit more. I’m a bit unsure, I’d be happy just to be able to drive a race car for a living, it doesn’t matter what it is!