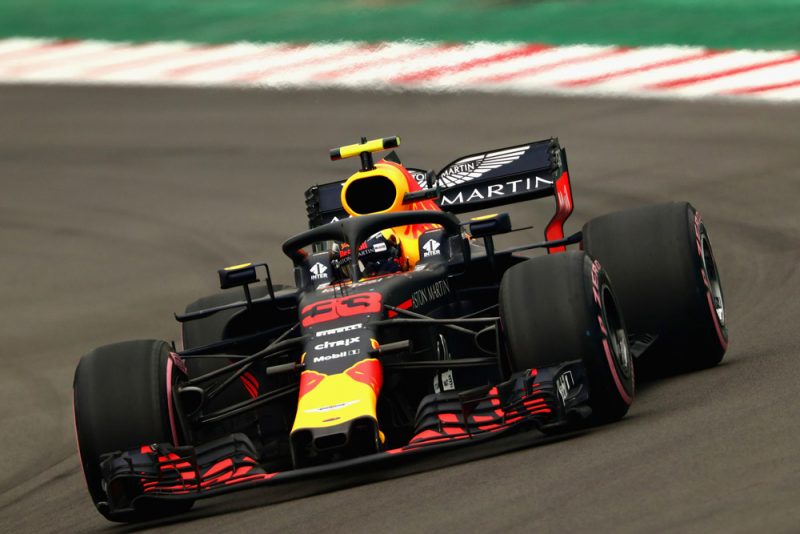 A strong start saw the Dutchman lead from the start, heading what looked like a potential 1-2 result for the team before Daniel Ricciardo suffered a late mechanical failure.

That promoted Sebastian Vettel to second and Kimi Raikkonen to third, while by finishing fourth Lewis Hamilton secured his fifth world championship.

An incredible start from Hamilton saw the Mercedes driver split the front row, nosing ahead before dropping in behind Verstappen at the first corner.

Pole sitter Ricciardo found himself relegated to third, before having to defend from Vettel and Bottas in a frantic squabble in the first half of the opening lap.

The race then settled down, Mercedes pitting Hamilton on Lap 12 as he began to slip into the clutches of Ricciardo.

It was a busy time for the Anglo-German squad who stopped Bottas on the same lap, Hamilton rejoining fifth and Bottas back out in eighth.

Ricciardo was in the following lap, covering the move by Mercedes in an unsuccessful attempt to leapfrog Hamliton in the pit stop sequence.

Predictably, race leader Verstappen took to the lane next time through, handing the lead of the race to Vettel with Raikkonen second.

Struggling on worn tyres, Verstappen made short work of Raikkonen into the first corner.

Hamilton and Ricciardo moved through on Raikkonen a lap later, the Ferrari driver losing two places in the exchange.

Both Ferraris finally took to the lane at the end of Lap 17, rejoining in fourth and sixth respectively, where they’d been prior to the pit sequence commencing.

The race then fell into a lull as drivers managed tyres, blistering a common complaint throughout the field.

Strategically it created a headache for those on the pit wall with a second stop increasingly likely but with most drivers not flushed with a healthy bank of tyres to fit should they change strategy on the fly.

In the best position was Verstappen, the race leader with a new set of Supersoft tyres available while those chasing him had no such luxury.

Carlos Sainz was forced out mid-race, the Renault driver pulling off the circuit to trigger the second Virtual Safety Car of the race.

The first had been called for Fernando Alonso in the early laps as the McLaren began to trail smoke after picking up debris from Esteban Ocon’s Force India on the opening lap.

Vettel swarmed all over the back of Ricciardo’s rear wing as the race resumed, the Red Bull driver’s cause not helped by having to work through traffic allowing the Ferrari to close and eventually pass into Turn 1.

Having cleared Ricciardo, Vettel then closed in on second placed Hamilton, easily taking the place into the first corner on Lap 39.

Struggling for pace, Hamilton then came under the attention of Ricciardo, the Red Bull having been as much as a second a lap quicker than the Mercedes.

It was a far more difficult pass for Ricciardo than it had been for Vettel, Hamilton eventually pinching a break into the opening chicane and skating through the grass as Ricciardo scampered through into third on Lap 47.

Ahead, Vettel pitted on Lap 48 to fit a set of Ultrasoft tyres, with Mercedes doing the same with a set of used tyres for Hamilton.

Race leader Verstappen also stopped, taking a set of brand new Supersoft rubber, but such was his advantage he rejoined at the head of proceedings.

Having stayed out while those around him stopped, Ricciardo found himself second and under the attentions of Vettel once again heading into the closing laps of the race.

But the Australian’s valiant drive came to zilch as his car began blowing smoke, his race ending parked in the escape road while running second on Lap 62 to trigger a third Virtual Safety Car.

Vettel was therefore released to chase Verstappen, who was protecting his car given the fate of his team-mate, ahead of Raikkonen in third.

Fourth place for Hamilton, who cruised around the latter part of the race, was a result which confirmed him as the 2018 Formula 1 World Champion.

It sees the Englishman join Juan-Manuel Fangio as a five-time world champion.

Behind Hamilton was Bottas, the Nico Hulkenberg, Charles Leclerc, Stoffel Vandoorne in ninth for McLaren and Pierre Gasly rounding out the top 10.