Victory in the 2018 Formula 1 world championship has seen Lewis Hamilton join the legendary Juan-Manuel Fangio with five world titles, and cement his position among the all-time greats of the sport.

Only Michael Schumacher has won more world championships, the German taking seven throughout his career; five with Ferrari and two with Benetton.

However, statistics fail to tell the full story, and the mantle of ‘greatest F1 world champion’ is one that has been debated almost since its inception in 1950.

In this week’s PIRTEK Poll, we’d like to know who you think is F1’s greatest world champion. The statistics speak for themselves; with 91 wins and seven world titles, Michael Schumacher stands alone as the most successful driver in Formula 1 history. At times controversial, he rose to prominence competing against Ayrton Senna and Alain Prost in the early 1990s before dominating the sport with Ferrari in the 2000s. Returning with Mercedes after an initial retirement, together with former Ferrari technical boss Ross Brawn he played an integral part in laying the foundations for the success the team has enjoyed in recent years. Fangio at the wheel of the Mercedse W196

With a knack of picking the right car at the right time, Juan-Manuel Fangio was a giant of the sport during its formative years. Racing for Alfa Romeo he came within touching distance of the first championship in 1950, before sealing his first crown the following year. With Mercedes in 1954 and 1955 he showcased his class before stints aboard a Maserati 250F and Lancia Ferrari D50 rounded out his career with 24 wins from just 51 starts – the highest wins to starts ratio of any driver. A revelation when he made his debut with McLaren in 2007, Lewis Hamilton fell just a single point short of the championship in his rookie year. He made amends the following season as he took the crown in Brazil with a last corner pass on Timo Glock to steal the championship from Felipe Massa. Since joining Mercedes, a move which confounded critics when it was announced in 2012, he’s gone on to win four titles in five years, taking 40 grand prix victories along the way. With 71 wins to his name, he trails only Schumacher on the all-time winners list. Nicknamed the ‘Professor’ during his career, Alain Prost remains the only French world champion. A calculating driver, he perhaps lacked the flamboyance of his peers, preferring to win the race at the slowest possible speed. In 1984 he came within half a point of a world championship, and missed out on titles while racing with Renault and Ferrari, but claimed three with McLaren and his last with Williams. Most famous for his battle with Senna while team-mates, a little known fact is Prost scored more points in 1988, meaning the Frenchman was arguably never beaten by the great Brazilian over the course of a year when they shared the same machinery. 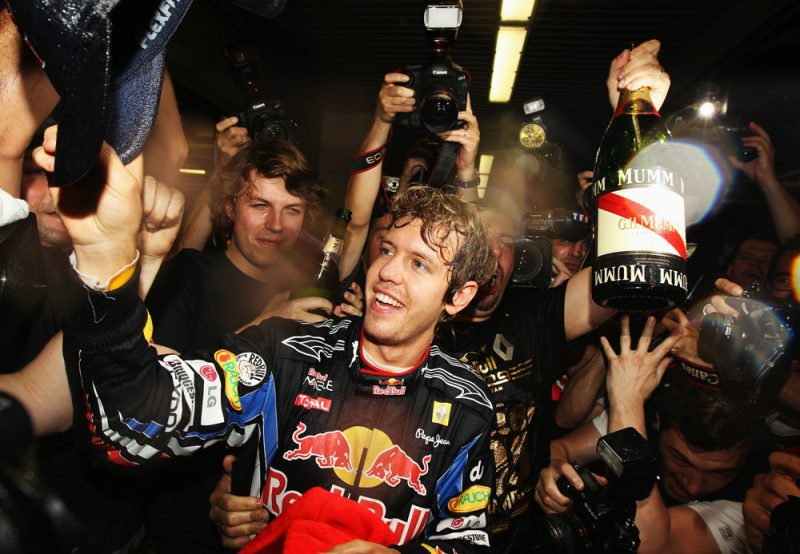 Victory in the 2010 world championship was unpopular in Australia as it meant Sebastian Vettel had beaten our own Mark Webber. The German made his debut in Formula 1 as a substitute for Robert Kubica at BMW, before Red Bull snapped him up and placed him with Toro Rosso. There he won in unlikely circumstances in Monza in 2008 before joining the senior team as it rose to dizzying heights the following year. A run of nine victories at the end of 2013 capped off his fourth title, with Vettel developing a reputation as a driver who liked to dominate a race. Second with Ferrari in both 2017 and 2018, he’s amassed 52 race wins to sit third on the all-time winners list behind Schumacher and Hamilton.

There are five other drivers who meet our criteria of having won three world crowns, starting with Sir Jack Brabham. The Australian legend won two titles for Cooper before partnering up with Ron Tauranac to win another title in 1966. Jackie Stewart won three titles, and 27 grands prix from just 99 starts to become the most successful driver in F1 history when he retired in 1973. Niki Lauda won two titles, retired, and then came back with McLaren to win a third in 1984. Nelson Piquet handed Brabahm its last world crown in 1983 before claim his third crown with Williams in 1987. Fellow Brazilian Ayrton Senna then won his first in 1988 before clashing with Prost to win in 1990 and dominate 1991.

Who from our list do you believe is Formula 1’s greatest world champion, or is it someone entirely different? Cast your vote in this week’s PIRTEK Poll.