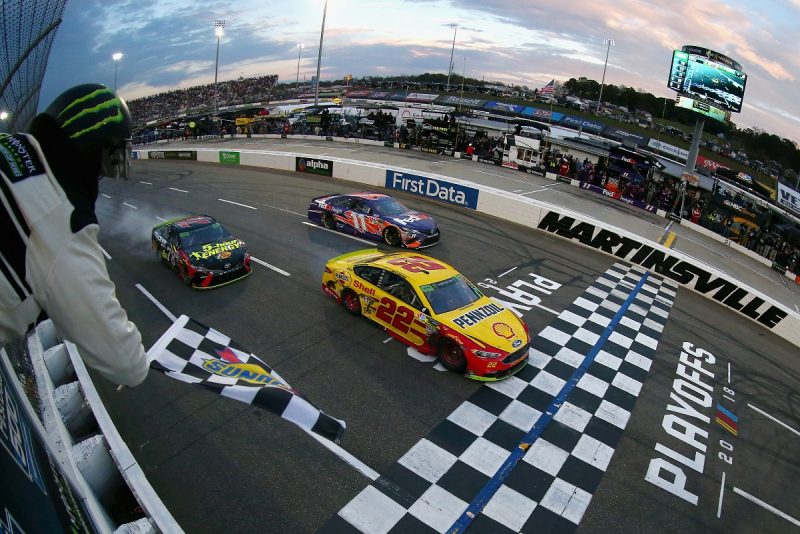 The top three at the finish

Joey Logano has snatched victory at Martinsville after he and Martin Truex Jnr banged into the side of each other on the final lap.

Logano and Truex Jnr fought over the lead at various times during the final stage of the first race of NASCAR Playoff Round of 8, but the 2017 champion was ultimately pipped even for second by Denny Hamlin.

The #22 Team Penske Ford and #78 Furniture Row Racing Toyota were nose-to-tail on the penultimate lap before Truex Jnr got down the inside and just led into Lap 500.

However, Logano gave him a nudge into the final corner and that was enough to sneak across the line in the lead, with both barely in control as a result of side-to-side contact.

Logano was already looking good when he led every lap of Stage 2, even if he was nearly pipped by Hamlin at the end, but has now guaranteed that he will be shooting for the title in Miami next month.

Hamlin, who is out of the Playoff race, nabbed second in the #11 Joe Gibbs Racing Toyota as Truex Jnr slewed sideways, having also taken out the opening stage.

The result was still an amazing salvage effort for Truex Jnr, who started from 33rd after his Camry failed post-qualifying inspections but was already up to eighth at the end of Stage 1 and fourth after Stage 2.

Kyle Busch, who started from pole, ran as high as second when the race restarted for a final time inside the last 40 laps and went on to take the chequered flag in fourth.

The #18 Joe Gibbs Racing Toyota driver is now officially second in the Playoff Standings, albeit with a greater number of points than Logano.

Brad Keselowski lost the lead in the pits during the final Caution period and eventually finished fifth in the #2 Team Penske Ford.

Kurt Busch is the first man outside the Playoff cut line after taking sixth in the #41 Stewart-Haas Racing Ford, and one position ahead of Chase Elliott (#9 Hendrick Motorsports Chevrolet) in both the race and standings.

Kevin Harvick remains 25 points above the cutoff despite only being able to round out the top 10 in the #4 Stewart-Haas Racing Ford.

He finished Stage 2 a lap down in 15th but got the free pass which put him back on the lead lap.

The Playoff contenders finishing outside the top 10 were Harvick’s other team-mates, Aric Almirola (#10 Ford) in 11th and Clint Bowyer in 21st.

Bowyer spun late in the race as a result of a tag from Jimmie Johnson (#48 Hendrick Motorsports Chevrolet), who was in the middle of the #14 Ford and Suarez as they rounded Turn 2.

The Round of 8 continues with the AAA Texas 500 this coming weekend (November 2-4 local time).