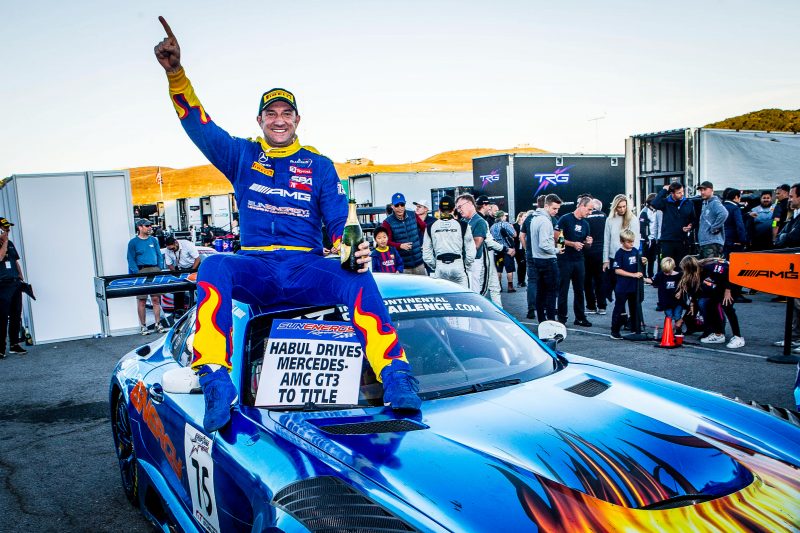 Australian Kenny Habul has clinched the Intercontinental GT Challenge Bronze Drivers’ title after surviving a day of drama in the California 8 Hours.

For Habul, the title is his biggest achievement of his career which started in Formula Ford in Australia in the late 1990s and was reignited with recent NASCAR and Sportscar events.

To add to the celebrations for Habul’s SunEnergy1 Racing team, Tristan Vautier finished third outright in the race with co-drivers Maro Engel and Maxi Buhk in the team’s second entry to clinch the Pro drivers’ title.

“To clinch the title today and have Tristan win his championship under the SunEnergy1 Racing banner at the same time is pretty special.

“This championship was not really on the radar at all at the start of the year.

“I did the Bathurst 12 Hour and finished on the podium there and then I became more aware about this and what it had to offer and it was appealing, really exciting.

“We got to race on some of the coolest race tracks in the world, stuff I dreamed about when I was a kid growing up in Australia.

“Then we started to have some success, which is not easy against these guys.

“All year I have been close to the Pro drivers’ times and that’s what I am most happy about, proving that I could be close and I am competitive, in all conditions.

“What a year, I think I should quit now because it’s not going to get much better than this.”

Habul’s title charge was dealt a blow when a slower competitor drove into the side of the Mercedes-AMG GT3 early in the second hour of the race and forced him back to the paddock area on the back of a recovery truck with badly damaged steering.

His team worked frantically for two hours to get the car back in the race with the knowledge that the entry had to complete 70 percent of the laps of the overall winner to be deemed a finisher. 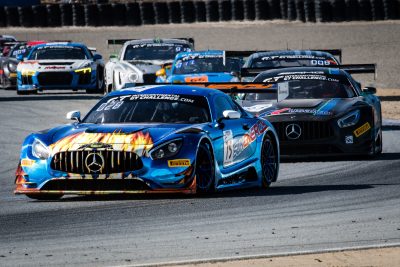 The SunEnergy1 Mercedes-AMG squad in action at Laguna Seca

The car re-joined the field and Habul shared driving duties with his co-drivers Mikael Grenier and Luca Stolz to reach the minimum number of laps with just 12 minutes remaining in the race.

The car was classified 27th outright and fourth in class to give him the championship by 17 points from Tim Pappas.

“I am disappointed that we got bashed into early and we had to repair it (the car),” added Habul.

“We were genuinely a top five car outright today and that’s saying a lot for a Pro-Am entry.

“I felt sorry for Luca (Stolz) and Mikael (Grenier) that we couldn’t do that.

“You have to take your share of bad luck, because we had a fair share of good luck through the season.

“Mercedes-AMG have been amazing since I bought the car; their support is first class,” Habul continued.

“For someone like me, I just don’t have time (to put in the preparation) and I expect the manufacturer to step in and help me and do what they need to do to ensure I get to races and everything is competitive and they did that.

“It was fascinating how AMG used their group of customers around the world to help us win this championship as part of four different teams, starting with Scott Taylor Motorsport at Bathurst back in February.”

Habul’s success follows a strong Intercontinental GT Challenge campaign, where he managed an outright podium with co-drivers Jamie Whincup, Vautier and Raffaele Marciello at the Bathurst 12 Hour in February.

A class podium at the 24 Hours of Spa followed, before Habul took out his class at the Suzuka 10 Hours, his year culminating with the Bronze Drivers’ title at Laguna Seca.