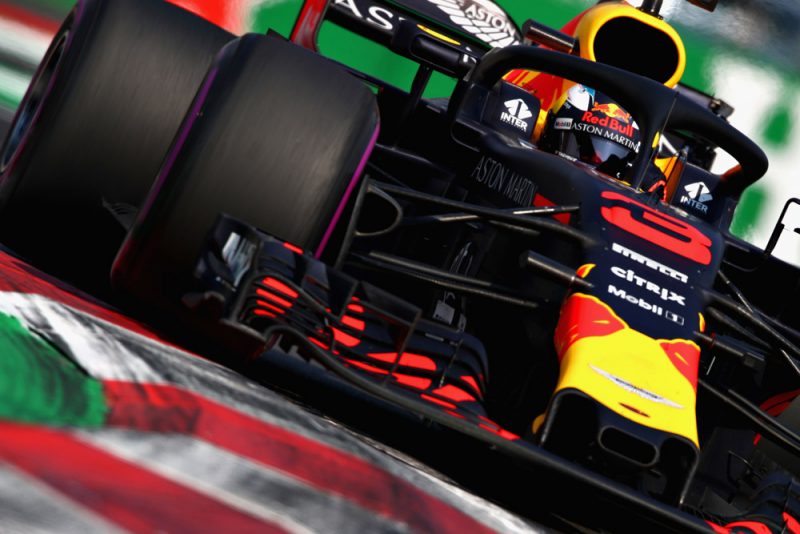 Daniel Ricciardo will head a Red Bull front row after denying Max Verstappen in the closing moments of qualifying in Mexico.

While all eyes were on Verstappen, the Australian improved on his final lap to pick his team-mate’s pocket and claim his first pole position at a circuit other than Monaco.

Third went to Lewis Hamilton, who will start ahead of championship rival Sebastian Vettel on a weekend which could see him crowned world champion.

After banking a time early, none of the Red Bull and Ferrari drivers opted not to run late in Qualifying 1 while the remaining field, including the two Mercedes, did.

Having had his earlier lap deleted for track limits, Fernando Alonso banked the seventh fastest time on his final effort as the session built towards its crescendo behind him.

Despite a mixture of tyre strategies in the early part, Qualifying 2 produced a largely predictable top 10 with both Red Bulls, Ferraris, Mercedes, Renaults, and Saubers making the cut.

It saw Esteban Ocon the first driver to miss out, the Force India driver ahead of Alonso and Sergio Perez.

A mistake on Hartley’s final lap entering the stadium section cost the Kiwi any chance of progressing, while a looming grid penalty for an engine change kept Pierre Gasly in the garage throughout.

The early pace was set by Vettel as the final part of qualifying began, before a strong lap from Verstappen saw the Dutchman provisionally on pole following the first set of flying laps.

A busy final few minutes saw the field leave the pit lane almost as one, jockeying for track position with Hamilton on track last.

Raikkonen was the first to start his final flying lap, followed by his Ferrari team-mate Vettel.

The Finn didn’t improve, while Vettel managed to go faster but was unable to demote Verstappen from pole.

A stunning late lap from Ricciardo saw the Australian best his team-mate to set the fastest time of the session, denying Verstappen a chance of becoming the youngest pole sitter in F1 history.

Last of the runners, Hamilton moved into third, one spot in front of title rival Vettel with Bottas fifth, Raikkonen falling to sixth.

For Red Bull the result marked the team’s first 1-2 in qualifying since the 2013 United States Grand Prix.

The Mexican Grand Prix starts at 0510 AEDT on Monday.