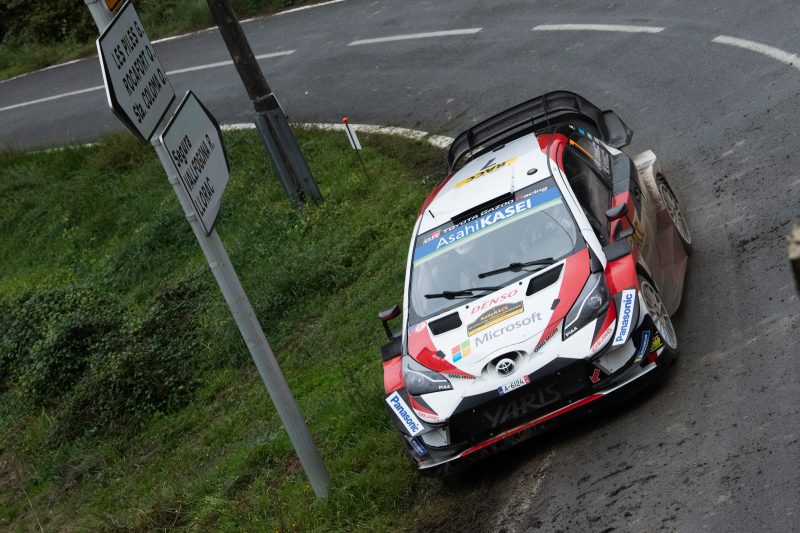 Ott Tanak’s World Rally Championship hopes have been seriously dented by a puncture as Jari-Matti Latvala took the lead on Saturday in Rally de España.

After the cancellation of the day’s first stage, Tanak added to his overnight lead by winning Special Stage 9.

However, the Estonian incurred a puncture on the final stage of the morning loop and dropped around two minutes.

That opened the door for his Toyota Gazoo team-mate Latvala, who closed in on the man who assumed the lead, Dani Sordo, by winning that stage.

He surpassed Sordo altogether on SS11 as the Hyundai driver struggled through the afternoon loop in his home event.

Sordo now sits sixth, although only 16.5s from the top.

M-Sport Ford’s Ogier went the other way as the defending world champion revelled in the rain to go from fifth at the start of the afternoon to second.

Sebastien Loeb (Citroen) is just 3.3s further back in his final event of the year having won SS12, one position ahead of Elfyn Evans (M-Sport Ford).

Neuville won SS11 and SS13 and indicated that he would be seeking to make up more ground on the final day.

“It has been a very strong Saturday for us,” said the Hyundai driver.

“We have had a great feeling from within the car and we have been able to really push throughout the entire day.

“We took two stage wins this afternoon and have climbed up to fifth place overall, just 12.7 seconds from the lead.

“It’s really close, and anything is possible. I can say for sure that we will continue to fight hard.”

Tanak took out the short Salou stage which rounded out the day.

The final day of the penultimate rally of the season features a repeated two-stage asphalt loop of Riudecanyes and Santa Marina, totalling 61.70km, from 1735 AEDT.