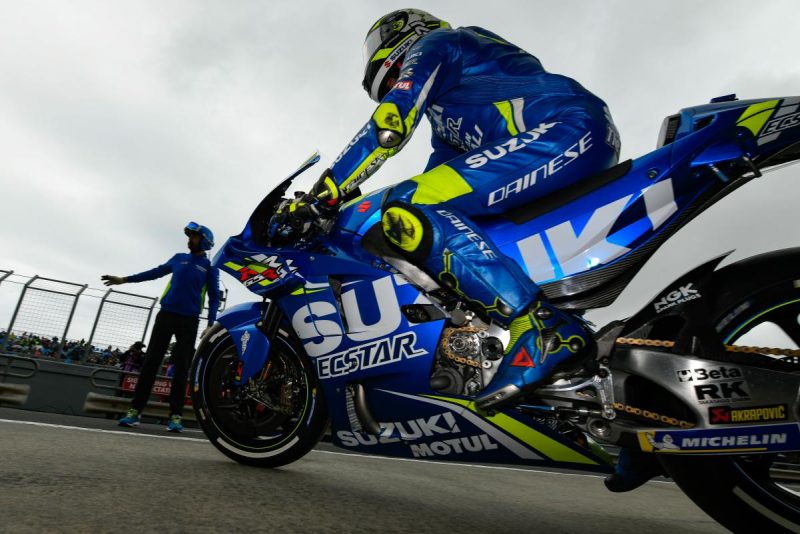 Andrea Iannone has finished fastest in Warm Up for the Michelin Australian Motorcycle Grand Prix with a lap not far away from the pole time.

Iannone clocked a 1:29.254s halfway through the 20-minute session, which was less than a tenth slower than Marc Marquez’s pole lap the afternoon prior.

The Suzuki Ecstar rider’s benchmark was set, however, on a soft-soft tyre combination when most others were running on a hard rear Michelin.

Among them was Movistar Yamaha’s Maverick Viñales, who was fastest prior to being knocked off by Iannone and closed the gap from 0.538s to 0.329s shortly after.

Jack Miller (Pramac Ducati) opted for medium-hard tyres on his way to ninth, and was reportedly trialling a new front fender designed to direct brake heat into the sides of the front tyre.

Marquez had a slight moment early on at Southern Loop in the overcast conditions but it was Alvaro Bautista who again found himself on the floor.

The Ducati Team stand-in folded the front at the Turn 4 Hairpin with just over five minutes remaining and ended up 14th.

Mike Jones, who fills Bautista’s seat at Nieto Ducati, was 3.931s back from Iannone at the rear of the 23-bike field.

The 27-lap race is all that is left for MotoGP at Phillip Island, with a start due at 1600 local time/AEDT.