Conservative approach fails to pay off for Miller

Conservative approach fails to pay off for Miller 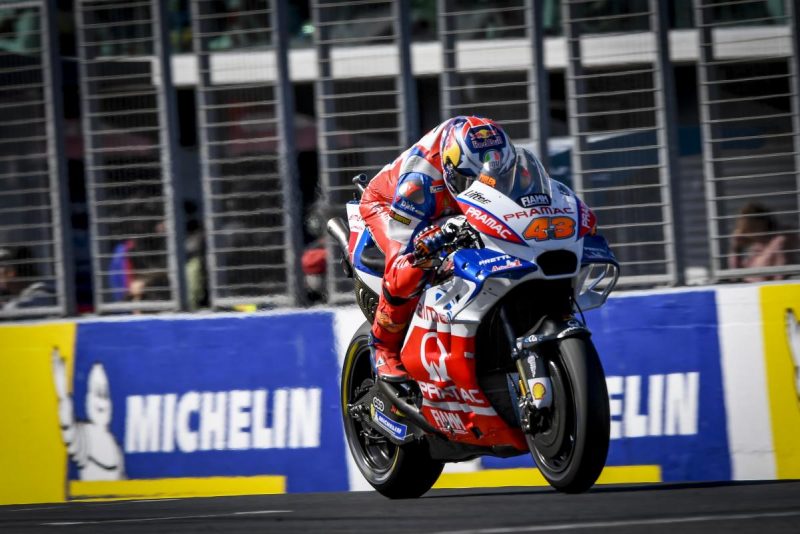 Jack Miller was left to lament how a conservative approach to today’s MotoGP race at Phillip Island failed to pay dividends in the final laps.

As he did in the 2017 Michelin Australian Motorcycle Grand Prix, Miller led on the first lap after his Pramac Ducati team-mate Danilo Petrucci ran off at the Southern Loop having vaulted from eighth on the grid to top spot.

However, the Queenslander, who qualified sixth, didn’t put up any resistance when Marc Marquez, Andrea Dovizioso, and Andrea Iannone came after him on Lap 2.

Miller, who opted for a medium front Michelin tyre and hard rear, was involved in a handful of stoushes in the early stages but gradually drifted away from the battle for the minor placings.

He circulated in seventh for the final 11 laps of the grand prix and quickly gave up an attempt to catch the tail of the preceding pack towards the end.

“(I was not leading for) as long as last year but that was planned,” explained Miller.

“I didn’t really feel comfortable out the front there; I was just trying to be calm.

“I didn’t actually expect to be leading that early but the opportunity arose so I put myself there but I was really trying to save the tyre, especially in the first three-quarters of the race.

“The bike was really slow off the corners (but) I was happy with that; I had a really dull (engine) map, and was just trying to conserve the tyre as much as I could, but it wasn’t enough.

“At the end there, I hit the switch, put it to the fast map, and started coming towards them.

“I only got to run it for about two laps and then I started to lose the rear and missing drive, so I said, ‘Alright, go back to the other one, let’s just keep going,’” he added in a slightly defeated tone.

“I just missed out on closing in on those guys; close but no cigar.

“First Independent but it’s still seventh position, so not too happy but on a bike that wasn’t inside the top 10 here last year, it was okay.”

Indeed, Miller was headed by the two factory bikes from each of Yamaha, Suzuki, and Ducati, and finished a touch over 15 seconds clear of the next Independent rider in eighth-placed Franco Morbidelli.

He was also somewhat upbeat at bagging a ninth top 10 result of the campaign, having crashed out of the preceding race at Motegi a week earlier.

“It’s been a good weekend, we’ve learned a lot again, and I’m just happy to walk away from it with a good result in front of the home fans,” confirmed Miller.

“(It was) A good race, I think the fans definitely got their money’s worth, and it’s nice to get back into that top 10 after Japan so I look forward to taking this momentum to Malaysia.

“It’s a track that we’ve tested at so I look forward to comparing how we were in testing to how we are now on the Ducati.”

Miller stays 13th in the championship while the injured Cal Crutchlow still remains the top Independent rider in the standings in fifth.