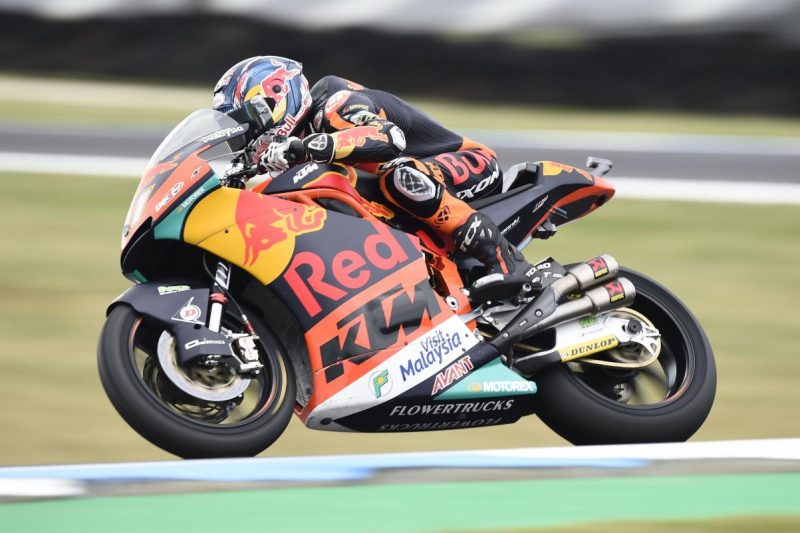 Brad Binder has beaten Joan Mir to victory by 0.036s in Moto2 at the Michelin Australian Motorcycle Grand Prix as the two championship contenders finished outside the top 10.

Binder regained the lead at the start of the penultimate lap but nearly lost the rear of his Red Bull KTM Ajo machine through the last corner of the race, inviting pressure from Mir (EG 0,0 Marc VDS Kalex).

The Spaniard, who came up from 14th on the grid after a succession of bold passes, ranged up Binder on Gardner Straight but still needed a few more metres to make the overtake.

Xavi Vierge, like Binder, was a constant presence among the front-runners and made a final lap move to deny Augusto Fernandez a place on the podium at Phillip Island.

Pole-sitter Mattia Pasini was the initial leader but dropped his Italtrans Kalex at the Turn 4 Hairpin while running second on Lap 2 and that was that.

Iker Lecuona (Swiss Innovative Investors KTM) was the next front-runner to crash out when he came in hot at the Southern Loop on Lap 7 and nearly took Vierge with him.

Remy Gardner had climbed as high as sixth from 15th on the grid in his home grand prix but carried too much speed into MG on Lap 13 and couldn’t keep his Tech3 up.

For a long period of time through the middle of the race it was Binder, Vierge, and Lorenzo Baldassarri who were the key combatants.

Mir began to show his hand with a little over five laps of the 25-lapper to run, soon followed by Fernandez, as Dominique Aegerter (Kiefer KTM) and Alex Marquez (EG 0,0 Marc VDS Kalex) began to lose touch with the leading pack.

Baldassarri, however, ran off and fell at MG with just over two laps remaining and ultimately brought his Pons HP40 home as last of the finishers in 22nd.

Vierge had just taken over first position from the Italian but was passed by Binder at Doohan Corner on Lap 24 before Mir lunged down his inside at the Hairpin.

The move forced Vierge to stand up his Dynavolt Intact Kalex and he dropped from second to fourth, before Luca Marini (Sky Racing Team VR46 Kalex) made a brave move from fifth to third at the start of the final lap.

However, Marini then ran wide at the Hairpin and Vierge re-passed Fernandez on the run to the chequered flag, where only 0.008s separated them.

Marini finished fifth from Aegerter and Marquez, the latter of whom started the day under a fitness cloud due to his unlucky crash in qualifying.

Marcel Schrotter’s Dynavolt Intact Kalex was pushed from the middle of the front row to pit lane after a problem on the grid but he rode back to ninth despite running onto the dirt at Doohan Corner on Lap 18.

Bagnaia had only qualified 16th and Oliveira 20th and their races weren’t much better.

Oliveira passed Bagnaia on Lap 4 but the Portuguese rider looked like giving up more points when he was re-passed easily by the championship leader for 12th at the Hairpin on Lap 17.

He got it back within a lap but only snipped a point from the Italian’s championship lead, which is now 36 with just 50 on offer in the two races which remain.

Round 18 of the season takes place at Sepang on November 2-4.