Bayliss: Miller could be at factory team in a year

Bayliss: Miller could be at factory team in a year 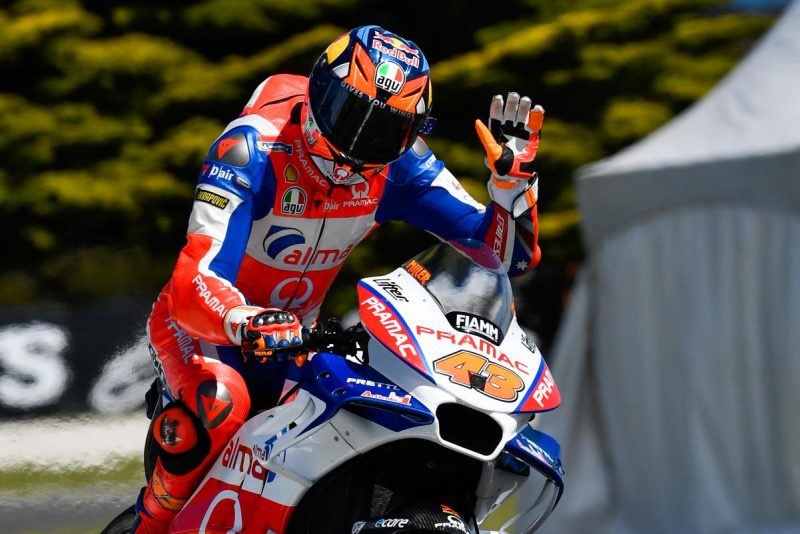 Troy Bayliss believes that Jack Miller is on the cusp of a promotion to Ducati’s factory team, perhaps as soon as 2020.

Miller was considered one of the options to replace the Honda-bound Jorge Lorenzo at the Bologna marque’s works team but ultimately missed out to current team-mate Danilo Petrucci.

He and Petrucci effectively each move up a step in the Ducati pecking order next year given that the Australian will be handed a current-specification Desmosedici at Alma Pramac Racing after riding a GP17 this year.

Their respective deals are, however, for 2019 only, unlike the other 11 factory riders.

Bayliss, a three-time Superbike World Champion and MotoGP race winner for Ducati, believes that Miller is at least the equal of his Italian stablemate and could also find himself at the factory team in 2020.

“I honestly thought there was a chance that he might have had the shot in the factory team next year,” Bayliss told Speedcafe.com.

“But then when I heard it was going to Petrucci, I thought, ‘Okay, well Jack could do the same job as him,’ to tell you the truth.

“I think he’s a better build for the bike as well; I know Danilo’s one of the biggest guys in the MotoGP paddock.

“I think the big boys at Ducati, they’re watching Jack of course; I think they’re just giving him a little bit more time.

“Jack’s certainly on their radar and it could only be another year away; you never know.

“He was already in the hunt for it, so it’s looking really good for him.”

While Miller has not yet managed to add a second podium to his breakthrough MotoGP race win at Assen in 2016, he has delivered a number of impressive performances during this campaign.

The 23-year-old qualified on pole for the first time in Argentina and achieved a first front row start in the dry in San Marino last month, when he was second only to the qualifying record-breaking Lorenzo.

While his wet weather skill is unquestioned, he described fourth in the sunshine at Le Mans in May as “maybe the most convincing race” of his MotoGP career to date.

Bayliss put the progress in part down to more focus from Miller and greater maturity in recent times.

“I honestly believe he’s our next thing,” the Ducati legend declared.

“I think the team that he’s on is taking their time with him and he’s had some good results but he’s certainly heading in the right direction.

“I know some of what he’s doing for training and the like and he’s quite different to what he used to be and I think he’s having a good time doing it.

“It’s sort of fun but even in Moto3, the guys are serious. He was sort of clowning around a little bit and he’s still a pretty down to earth Aussie guy but he’s certainly got a much more serious side to him with the way that he approaches everything now.”

Miller is currently 13th in the championship, 59 points behind Petrucci in seventh.

He qualified on the second row for his home grand prix for the third year running and will take a revised approach to the race having been an early leader last year before wearing out his tyres.

The Michelin Australian Motorcycle Grand Prix weekend concludes today, with MotoGP first on track for Warm Up at 1140 local time/AEDT before race start at 1600.