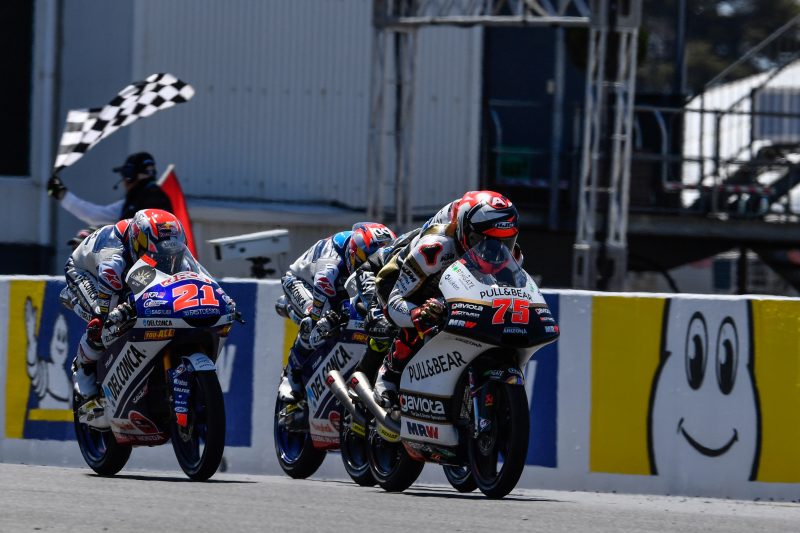 Less than a tenth covered the top five at the finish

Albert Arenas has won a frenetic Moto3 grand prix at Phillip Island as Jorge Martin extended his championship lead due to an unfortunate crash for Marco Bezzecchi.

Thirteen riders swarmed into Doohan Corner at the start of the 23rd and final lap and the top 14 were covered by 0.989s when they reached the chequered flag.

Martin, whose position fluctuated all the way through the top 10 during the race, scythed up the inside from fifth to the lead on Lap 22 and looked to have pulled a small buffer.

However, he was reeled in and nearly went down when he and Philipp Oettl touched at the Southern Loop as they converged on the apex on the final lap.

Oettl ran well wide as Martin gave up second position to Celestino Vietti, before nearly dropping his Del Conca Gresini Honda on his own at MG.

Arenas led throughout the final lap and his Angel Nieto KTM had enough legs on Gardner Straight to carry him to a 0.052s victory over Fabio Di Giannantonio (Del Conca Gresini Honda).

Vietti (Sky Racing Team VR46 KTM) only 0.007s further back to bag a podium in his second ever grand prix.

Martin finished fifth having been run down by Tatsuki Suzuki (SIC58 Honda) on the drag to the finish line.

He nevertheless extended his championship lead over Bezzecchi (Redox PruestelGP KTM) from one point to 12.

Bezzecchi started 15th but caught Martin, who was eighth at the time, within five laps and led at the start of Lap 8.

However, when Gabriel Rodrigo (RBA BOE Skull Rider KTM) came in hot at MG on Lap 11, he went down as he grabbed the brakes and the sixth-placed Bezzecchi couldn’t stay up on the grass when he was taken off-road.

Darryn Binder led more laps than anyone (10) but finished only 12th after he came in deep under brakes at the Turn 4 Hairpin on Lap 21 and dropped at least half a dozen positions from fifth.

Oettl came home 15th, although only 2.148s off first position, on his Sudmetal Schedl KTM.

There was a huge spill at the Stoner Corner on Lap 14 when Marcos Ramirez highsided and his Bester Capital Dubai KTM took down team-mate Jaume Masia, whose own bike went flying through the air.

Both riders have been taken to the circuit’s medical centre.

Di Giannantonio’s runner-up finish also reignites his championship hopes given that he now trails Martin by 20 points heading to Malaysia next weekend (November 2-4).