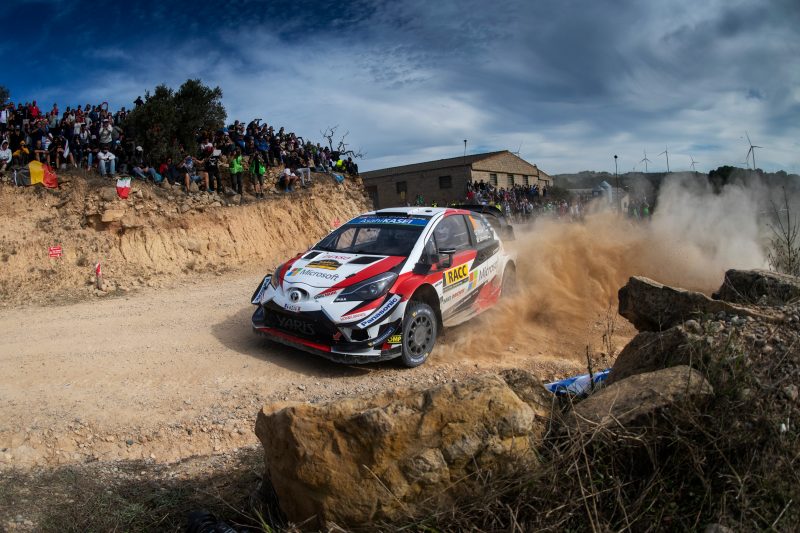 Ott Tanak has boosted his World Rally Championship title hopes as he pulled clear of the field on the first full day of Rally de España.

Tanak won the first of the day’s six stages and was ultra-consistent for the rest, to go 26.8s ahead of second-placed Dani Sordo.

His championship rivals Sebastien Ogier and Thierry Neuville are seventh and ninth respectively.

Ogier had the lead after Thursday night’s opening Barcelona city stage but Tanak had cut that to 0.1s after Special Stage 2 and extended his lead over the chasing pack in all but one of the subsequent stages.

“Overall I would say we have had a very good day, particularly from our position on the road as everybody starting behind us in the order had better conditions,” said the Toyota Gazoo driver.

“I had a good rhythm this morning, particularly the first two stages which were quite nice and flowing. In the beginning of the afternoon I had a really good feeling with the car.

“We lost that feeling a bit in the middle stage, but I was still able to keep pushing and now we have a good gap.

“Nothing is finished yet though: Tomorrow we have a new rally and it looks like it will be wet.”

Sordo (Hyundai), who won SS5, took over second position overall from Elfyn Evans (M-Sport Ford) at the end of the afternoon.

Behind them is Sebastien Loeb, who battled understeer in his Citroen before moving up the leaderboard.

Jari-Matti Latvala, the day’s most prolific stage winner, would have been far better placed but for a puncture on the La Fatarella-Vilalba stage (SS4) when he was again on track to top the test.

The Finn is 37.6s back from his team-mate Tanak in fifth.

Ogier (M-Sport Ford) ran off into a field on the day’s second stage, before Neuville (Hyundai) overran a junction on the following test, and both struggled as the first two cars on the gravel roads.

Andreas Mikkelsen (Hyundai) was the day’s other stage winner and is sixth overall.

Saturday’s itinerary takes the field back onto asphalt for seven stages totalling 121.90km from 1723 AEDT.