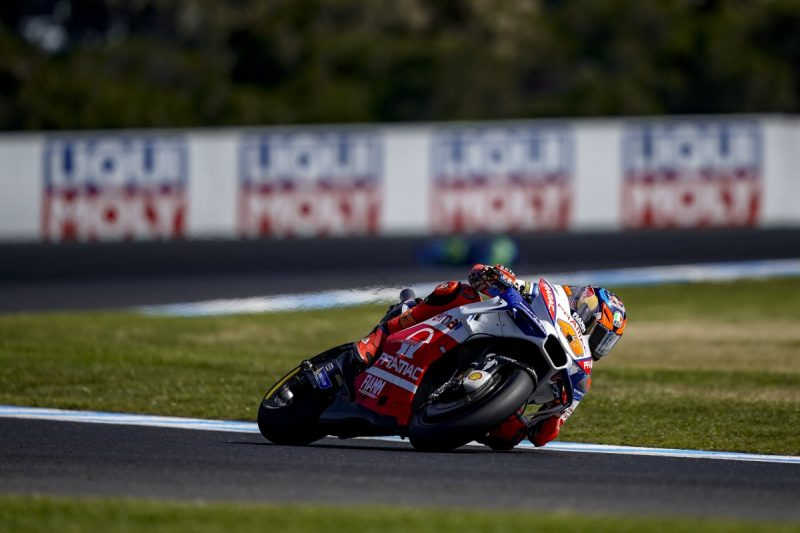 Jack Miller is content enough with his starting position for the Michelin Australian Motorcycle Grand Prix after surviving a ‘scary’ qualifying session.

Light rain fell at the beginning of Qualifying 2 but appeared to have cleared as the 12 riders started their first flyers.

However, the precipitation returned with around three minutes of the quarter-hour remaining, preventing all but Movistar Yamaha’s Maverick Viñales from improving on their first runs.

He and Miller were the two riders to seriously go after a faster lap in the challenging conditions, but the latter nearly folded the front of his Pramac Ducati at the final corner while on a personal best lap and remained sixth.

“It was scary, it was heart in mouth, sort of put your stuff on the table and see what you got,” explained the Australian.

While there was no repeat of his Argentina heroics, Miller was somewhat pleased with his qualifying result.

“I was hoping for a little bit more; you could see I was keen to get out there and try and get it underway (because) I didn’t know if the rain was rolling in or not, and I sort of missed my window to do the lap time.

“We were sort of doing the donkey work out front, I was first bike on track, which was a good thing if the rain had come, but it didn’t.

“Well, it did in the last sector, especially on the second tyre when I was pushing really hard and I had a couple of big moments.

“I had one into Turn 12, which is a place where you do not want to crash, and then the next lap was another decent lap but coming into Lukey Heights I lost the front as I was coming in under brakes there and had to hold myself up on the elbow there so I have to thank the elbow for saving me a couple of times.”

Miller started fifth in each of the last two Australian Grands Prix but vaulted to an early lead in 2017.

Having commented in the build-up to the race about the difficult of managing tyre life at Phillip Island without a marker in front, he went as far as noting that “I hope I’m not leading” at the start, and predicted a cagey race.

“I want to sit with those guys (front-runners) and I think it will be a lot of controlling the pace,” suggested Miller.

The MotoGP field will return to the track for Warm Up at 1140 local time/AEDT.