Marquez sets pace in FP3 on the Island

Marquez sets pace in FP3 on the Island 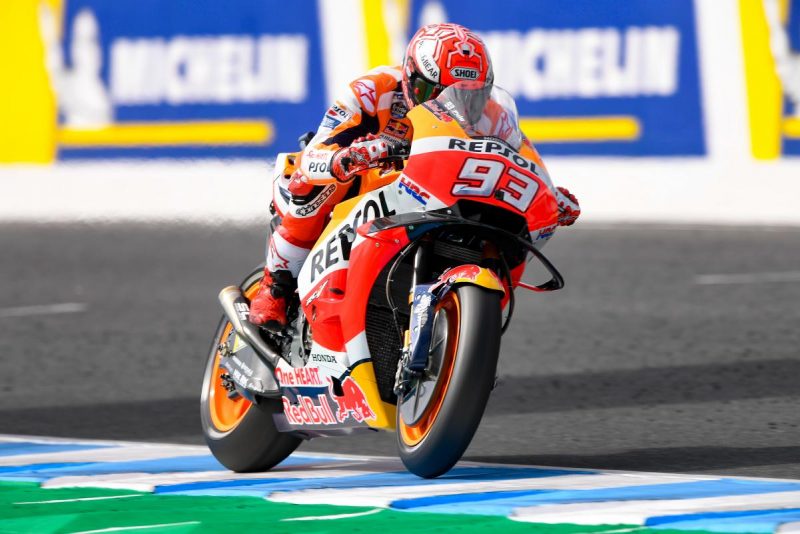 Marc Marquez has gone fastest in the third MotoGP practice session at the Michelin Australian Motorcycle Grand Prix, despite a fall.

The 2018 world champion rolled out a 1:29.714s in the final few minutes to bump Maverick Viñales back to second position, while Jack Miller ended up third.

Only Marquez, Miller (Pramac Ducati) and Valentino Rossi (Movistar Yamaha) found more time than their Friday efforts and even then, the combined top 10 remained exactly the same but for the addition of Hafizh Syahrin due to the withdrawal of Cal Crutchlow (LCR Honda).

As such, Dani Pedrosa (Repsol Honda) and Ducati Team substitute Alvaro Bautista remain on the outside and will have to start qualifying from Q1 this afternoon.

Viñales took up top spot with a 1:29.756s with 10 minutes to run despite his Movistar Yamaha breaking into a small rear slide exiting MG.

Marquez, on a new medium front/soft rear as opposed to Viñales’ soft front/hard rear, then snipped 0.025s from his Friday best to go fastest on Saturday.

It wasn’t a trouble-free session for the Spaniard, however, as his Repsol Honda folded the front at the Turn 4 Hairpin on an out lap earlier in the piece.

The newly crowned Champion tips off at Turn 4 on his outing lap!#AustralianGP 🇦🇺 pic.twitter.com/SN3Pe1NNXU

Andrea Iannone remains the fastest on combined times on his Suzuki Ecstar entry and was fourth-fastest in Free Practice 3, one position ahead of Rossi.

Syahrin was moved up into the top 10 due to Crutchlow’s injury but he too had to visit the medical centre after a crash at Doohan Corner.

The Malaysian Tech3 Yamaha rider was, however, declared fit a short time later.

Mike Jones remains at the bottom of the field on combined times but found another 0.645s relative to his Friday times.