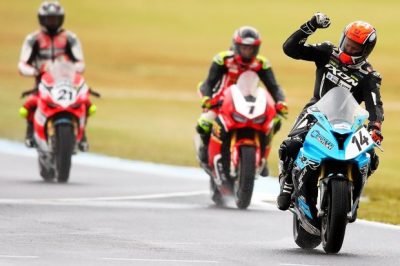 Glenn Allerton has beaten Troy Bayliss by 0.017s at the line in a wet track Australian Superbikes thriller.

Allerton (BMW), Bayliss (Ducati), and Troy Herfoss (Honda) battled for the lead throughout the eight-lapper and event went three-wide braking for the Turn 4 Hairpin on the final lap.

Race 1 winner Bayliss got the holeshot and kept the lead into the first corner despite breaking into a wheelie as he pulled gears down Gardner Straight.

Allerton briefly dropped to fifth but had taken Bayliss for second near the end of the lap after Herfoss moved up to first position at Siberia.

A period of relative stability followed but the front-runners remained tight until Allerton got past Herfoss into Doohan Corner, and Bayliss reclaimed second into Stoner Corner, on Lap 5.

However, in the challenging conditions after pre-race rain, Allerton half-highsided at the other end of the chute at the Hairpin and gave up two positions.

Herfoss dived past Bayliss into the Hayshed on the penultimate lap and the three-time world champion dropped to third, behind Allerton, when he was loose off MG.

Allerton made a brave under brakes pass at the Hairpin on the final lap as he and Herfoss nearly touched, and Bayliss followed.

Only 0.162s separated first from third as Allerton took victory, while Yannis Shaw (Kawasaki) came from nowhere to pinch a distant fourth after a long duel over that position between Max Croker (Suzuki) and Alexander Phillis (Suzuki).

Superbikes have their third and final race straight after at 0935.