Viñales on top in FP1 at Phillip Island

Viñales on top in FP1 at Phillip Island 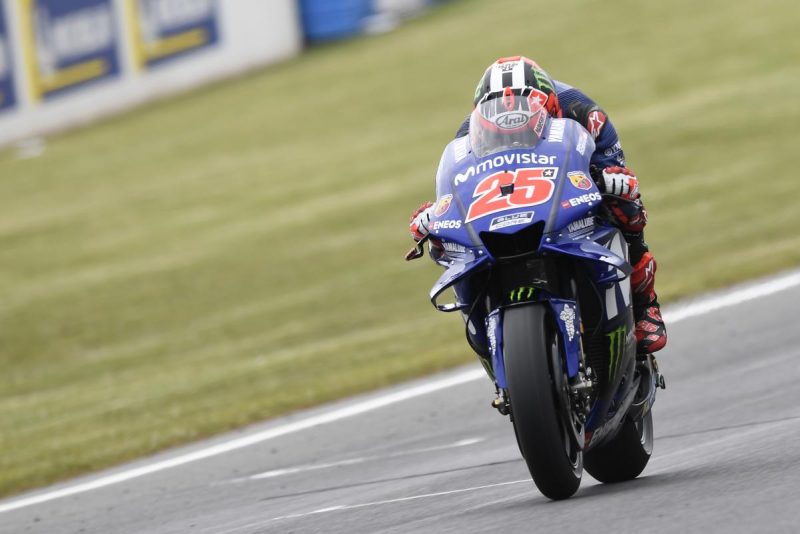 Maverick Viñales has set the pace as Jack Miller went a close second in Free Practice 1 for the Michelin Australian Motorcycle Grand Prix.

Viñales set the 1:29.952s benchmark on the 11th lap of his first run, on a soft front/medium rear combination, and while that effort came within the first 20 minutes there would be none who would beat it.

Marc Marquez looked a threat to take top spot with five minutes to run but the front wheel of his Repsol Honda quickly gave way as he negotiated MG and the Spaniard went down.

Instead, it was Miller who was the second man to lap Phillip Island in sub-90 seconds as he went 0.037s shy of the #25 Movistar Yamaha.

His Pramac Ducati team-mate Danilo Petrucci was an even later improver, going faster to the first two sectors after the chequered flag but drifting to the third-fastest time, a 1:30.027s.

Andrea Dovizioso, on a factory machine, made for three Ducatis in the top four of the 45-minute session, ahead of the LCR Honda of Cal Crutchlow.

Pedrosa also crashed during the session, a fast lose at Doohan Corner just past the halfway mark.

Rossi ran off at the same spot five minutes later but kept his machine upright as he rode through the wet grass.

The session was delayed due to a long red flag in Moto3 FP1 for oil on the circuit.

While rain fell at various times in the hours preceding the first premier class hit-out, the field ran in dry, slightly overcast conditions.