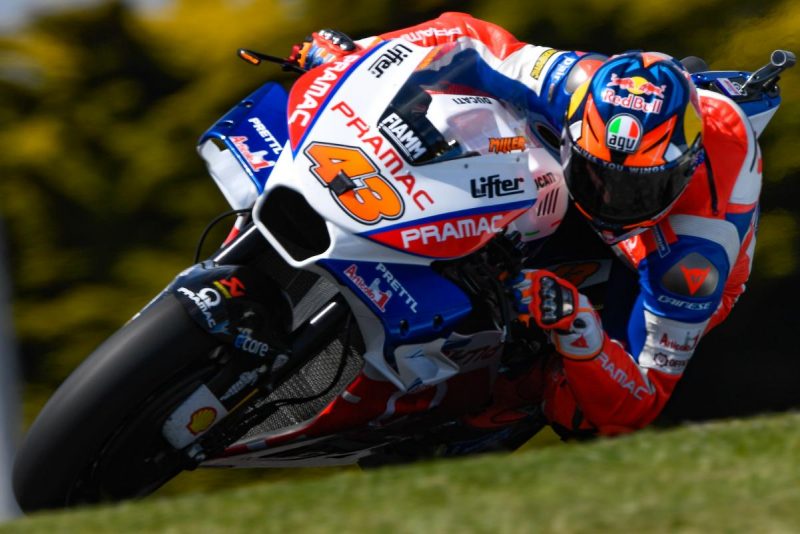 Jack Miller believes that he and his Pramac squad have work to do but is satisfied enough with his performance in Friday practice at the Michelin Australian Motorcycle Grand Prix.

Miller finished the day eighth-fastest at 0.707s off the pace, having missed out on topping Free Practice 1 by 0.037s.

The Queenslander is therefore in Qualifying 2 as the order currently stands, but feels that he needs improvement from his bike to stay there.

“Good to be in the top 10 but on the cusp of being outside of it so we’ve got a little bit of work to do.

“I was happy with the morning but the changes we made in the afternoon were pretty good but just created some dramas for us in terms of braking and also accelerating, getting a lot of (arm) pumping.

Miller had declared himself a realistic podium chance earlier in the week and was not straying from that comment despite his difficulties.

He pointed to encouraging race simulation during FP2, which kicked off 20 minutes after the schedule race start time on Sunday afternoon.

“We did a sort of race run there; I think I had well over a race distance on the front tyre and the rear was quite knackered especially because I used it when the track was green this morning (after earlier showers and cleaning of an oil spill).

“The bike’s still behaving quite well, so I think we should be right.”

Miller led the early laps of last year’s Australian MotoGP before fading due to tyre wear.

He went on to finish seventh, his best result on home soil in the premier class, having won the grand prix in his final year in Moto3 in 2014.