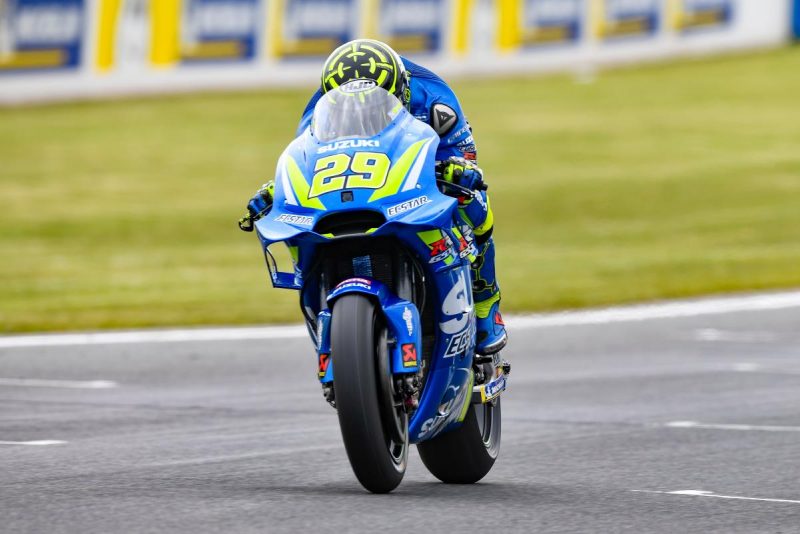 Andrea Iannone has finished on top in Friday running at the Michelin Australian Motorcycle Grand Prix with a post-chequered flag flyer in Free Practice 2.

A flurry of fast laps came in the dying stages as riders took on new tyres, with four different riders holding the fastest lap during the final five minutes.

Jack Miller (Pramac Ducati) ended up eighth and is provisionally in the top 10 for direct passage to Qualifying 2 tomorrow afternoon.

Dovizioso was first to lay down a real marker on fresh rubber, usurping Iannone with a 1:29.406s in the 42nd minute.

Viñales was next to go to the top of the timesheets, but until Petrucci undercut him by 0.063s barely seconds later.

Iannone saved the best until last by lapping Phillip Island in 1:29.131s on his Suzuki Ecstar machine.

Cal Crutchlow finished fifth-fastest but his participation for the rest of the weekend is under something of a cloud given he was stretchered away from Doohan Corner, where he lay prone, after crashing his LCR Honda inside the final 15 minutes.

Miller, Alex Rins (Suzuki Ecstar), and Valentino Rossi (Movistar Yamaha), rounded out the top 10, and all are currently on-track to start qualifying in the second stanza.

Alvaro Bautista is back in 15th in his outing on a factory Ducati Team entry having crashed in the first 10 minutes of FP2 at Siberia.

He did not reappear thereafter due to his other bike still being afflicted by mechanical gremlins dating back to the first practice session.

Both Marquez and Rossi skated off at the same corner moments later, although they stayed upright.

Injury replacement rider Mike Jones (Nieto Ducati) brought up the rear again but ended up half a second closer to the front than he was in FP1.