Binder quickest in Moto2 as Australians come to grief

Binder quickest in Moto2 as Australians come to grief Brad Binder has ended Friday on top in Moto2 after a carnage filled second practice session at the Michelin Australian Motorcycle Grand Prix.

Both Australians, Remy Gardner and Bryan Staring, ended up off their bikes during the day and finished well down the order.

Gardner had a big highside at the Southern Loop before he could set a time in Free Practice 1 but reappeared in FP2 and went 27th fastest on combined classification.

His team-mate for the weekend, Staring, was taken down at the Turn 4 Hairpin in FP2 when Khairul Idham Pawi outbraked himself and skated into the #67 Tech 3 machine.

Staring did not take any further part in the session, leaving him 2.754s off the pace in 29th.

Red Bull KTM Ajo’s Brad Binder was on top for most of FP1 with a 1:33.701s set on just his second flyer, which in fact served to move his own benchmark at the time.

Marcel Schrotter (Dynavolt Intact Kalex) was third-fastest in FP2 but second on combined times by 0.087s having topped FP1.

Mattia Pasini’s morning efforts kept him third on his Italtrans Kalex, ahead of Iker Lecuona.

The latter clocked a 1:34.051s early in FP2 before a fast off at Doohan Corner when the front end of his Swiss Innovative Investors KTM washed away.

He wasn’t alone as several other crashes marred the afternoon hit-out. 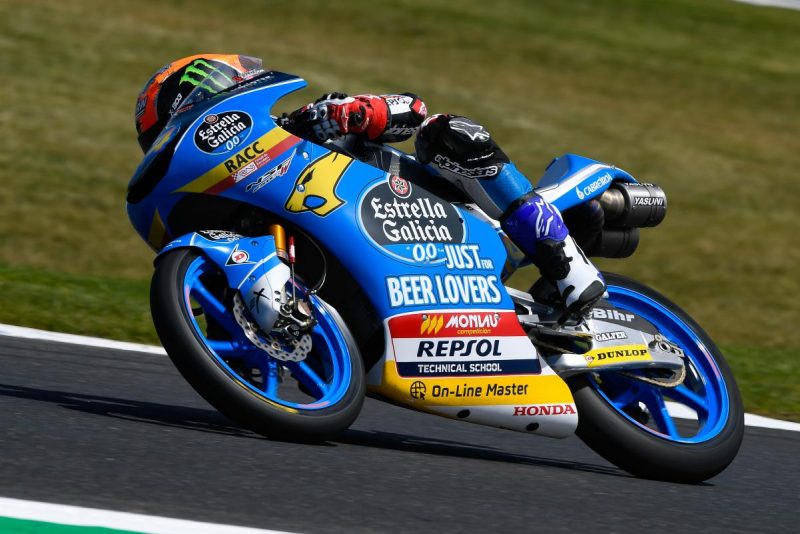 Aron Canet was fastest in combined Moto3 practice, which came to a frightening end went Fabio Di Giannantonio went over his handlebars and hit another rider.

Di Giannantonio was braking for the Turn 4 Hairpin when he flew over the front of his Del Conca Honda, and bike and rider in turn whacked Nakarin Atiratphuvapat in the back.

Atiratphuvapat managed to just about stay in the saddle of his Honda Team Asia entry while Di Giannantonio eventually walked away from the scene before being taken to the medical centre for checks.

The Italian, who was hospitalised due to another frightening crash in last Sunday’s race in Motegi, was declared fit a short time later.

The Italian is launched over the bars and into the back of @ChipNakari, who somehow manages to stay up right! 😮#AustralianGP 🇦🇺 pic.twitter.com/WkXte8N8go

Canet set the best time of the day, a 1:37.285s, in the final five minutes of Free Practice 2 aboard his Estrella Galicia Honda.

Marco Bezzecchi, one point off the championship lead of Martin, was fourth-fastest on his Redox PruestelGP KTM.

FP1 was subject to a red flag interruption of hour two hours when a problem for Stefano Nepa’s CIP – Green Power entry dropped oil all over a track which was already wet from rain before and during the start of the session.

The Italian was suspended from FP2 for irresponsible riding, given that he continued to ride on circuit despite the issue.

All other riders set their respective fastest laps in the second session.