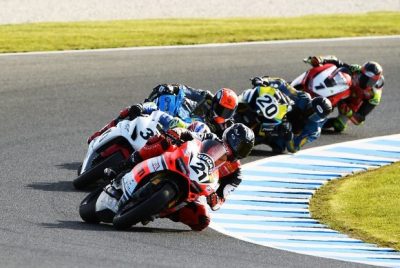 Bayliss and pole-sitter Allerton were locked in combat for the duration of the eight-lap race, during which they were rarely separated by more than half a second.

However, it was the veteran Ducati pilot who got the job done by 0.268s over the BMW at the line.

Fellow front row starter Troy Herfoss (Honda) dropped positions early on but didn’t quite have the pace to go with the top two and finished a distant third.

Hunter Ford qualified on pole for Race 1 of Supersport 300, ahead of Lachlan Taylor and Oli Bayliss.

Race 2 of Australian Superbikes starts tomorrow at 0855 local time/AEDT, with the Supersport 300s having their opener at 1740.