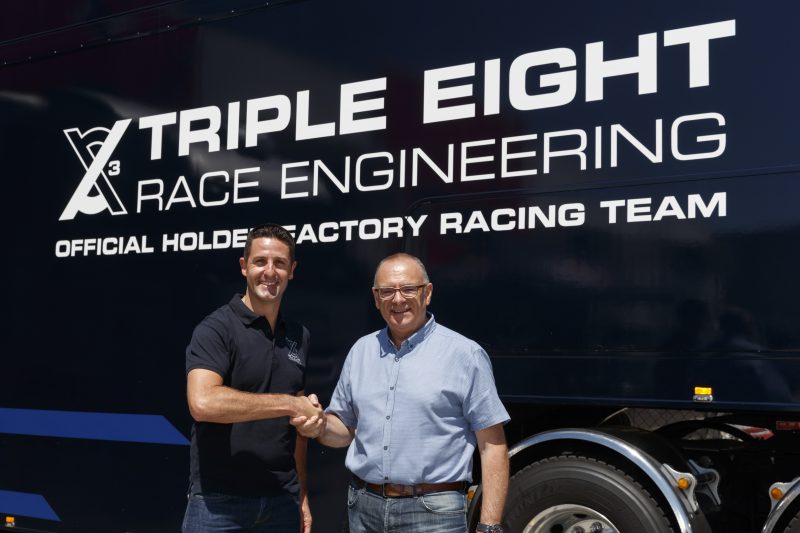 Jamie Whincup has become a shareholder in Triple Eight Race Engineering, the team has announced.

The seven-time Virgin Australia Supercars Champion has taken a minority stake in the team, which already counts Paul Dumbrell, Tim Miles, and Jessica Dane as shareholders in addition to team principal Roland Dane.

VIDEO: Jamie Whincup explained why he decided to become a Triple Eight shareholder

“The guys and girls at Triple Eight are like family to me and if it’s my choice, I will keep racing with them until I am 80 years old,” said Whincup.

“My motivation to be a team owner has risen from the fact I simply love the concept of motorsport. I want to ensure that I’m still racing well after my driving career.

“I thank Roland and the management of Triple Eight and the current sponsors for accepting my proposal to be a shareholder and I promise I won’t let you down.”

The 35-year-old joined Triple Eight in 2006 and is currently signed on to drive for the team until at least the end of 2019 after announcing a one-year extension in January.

Dane sold stakes in Triple Eight, of which he was sole owner at the time, in 2015 as a means of succession planning.

The latest move is also seen as preparing a path for life post-racing for Whincup, who also opened a café/car wash near his Gold Coast base in 2016.

“Jamie has proved over the years that he is a team player and has Triple Eight’s best interests at heart,” said Dane.

“Just as in racing, it’s vital in business to be planning ahead for every scenario and the boys and girls here at Triple Eight recognise that he potentially has a lot to offer in this respect.

“Jamie and I have been working on a plan for him to come into the business side of the team for a few years, so to see this start to come to fruition now is very satisfying.

“I’ve no doubt he’ll put every effort into learning as much as he can about the running of Triple Eight to make sure that his contribution is valuable.”

As to a timeline on Whincup’s driving future, the all-time record holder for Supercars race wins has indicated a desire to continue to race beyond his current deal, in 2020.

“While my focus during the next two seasons is to drive the race cars to the absolute best of my ability, I look forward to investing my spare time into learning the Triple Eight and Supercars business,” he explained.

“We proudly display the Peter Brock trophy at our headquarters and focus on the fight to retain the drivers’ championship trophy.”

Triple Eight’s Shane van Gisbergen is currently second in the championship, trailing Scott McLaughlin by 14 points, while titleholder Whincup is 433 back from the lead in third.