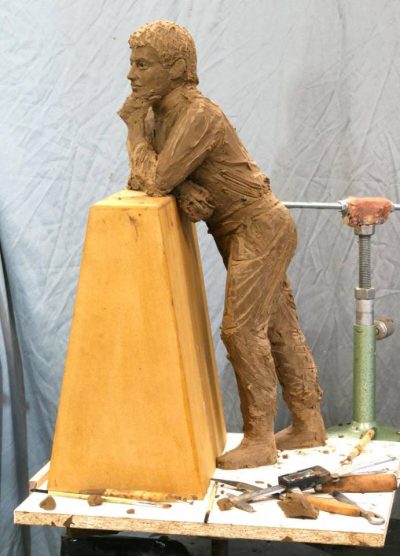 A work in progress of the 1:3 maquette of the memorial

Work is underway in Adelaide to create a new memorial to Ayrton Senna at the scene of the Brazilian’s final Formula 1 Grand Prix win.

Ayrton Senna claimed the last of his 41 race wins around the streets of Adelaide in 1993, winning his last race for McLaren ahead of Alain Prost and Damon Hill.

Project founder Michael Duregon met with the Ayrton Senna Foundation in 2016, gaining its approval for the memorial.

“I met with the Ayrton Senna Foundation back in 2016,” Duregon told Speedcafe.com.

“They wouldn’t let me do anything until it was authorised by them, and they took 18 months to get their legal department to send me the paperwork.

“I’ve gone about getting the maquette made up, which is the 1:3 concept, which I’ll be taking back to Brazil and organising a crowd funding scenario with the Ayrton Senna Foundation helping me to promote it.

“It’s about a $200,000 memorial once it’s installed – we want to raise a lot more money than that through the crowd funding and present that in a big cheque – we’ll get his sister and his mother over here for the launch and do a presentation of hopefully a significant amount back to the Foundation.”

A 1:3 scale version is currently being sculpted by Ken Martin, who has previously created statues for Melbourne Cup winning racehorse Makybe Diva among others.

Duregon hopes to present the mock up to the Senna Foundation for final approval in Sao Paulo in February.

Once approved, the statue itself is set to be cast in two-tone bronze with Senna’s famous yellow crash helmet recreated in full colour.

“We’re trying to have an effect where, when the race is on, it looks like he’s watching the race,” Duregon added.

“The memorial is also designed with that barrier being either side that will encourage people to share their photo on social media.”

It’s proposed the memorial be placed close to the Senna Chicane at the end of the front straight on the Adelaide Parklands circuit.

Along with the full size statue, Duregon hopes to produce 41 smaller scale replicas, one for each of Senna’s F1 wins, to help fund the project along with a number of other items to stimulate interest and raise further funds for the Foundation.

It’s hoped the memorial will be approved and ready in time for its unveiling ahead of the 2020 Adelaide 500.