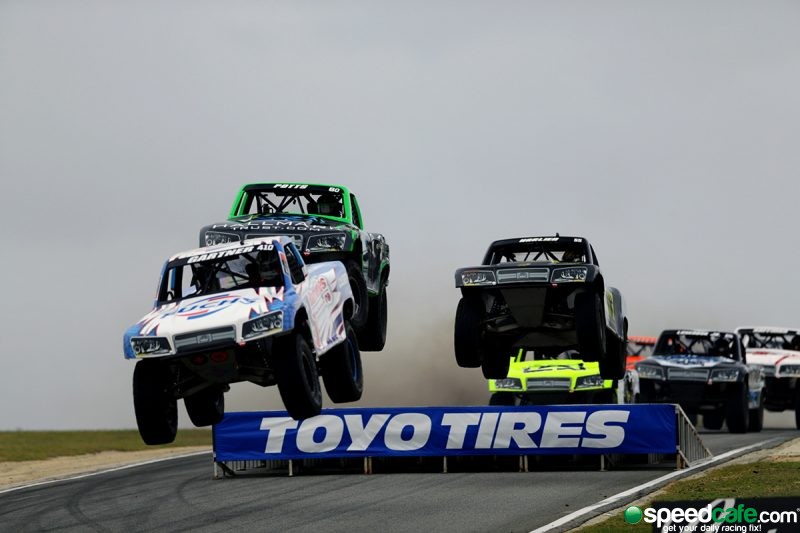 SST are set to compete at Sydney Motorsport Park

The Australian Racing Drivers’ Club is satisfied that Stadium Super Trucks will not pose a safety issue at Sydney Motorsport Park this weekend.

The ARDC operates Sydney Motorsport Park, which will be the scene of the fifth round of the Australian Motor Racing Series on October 26-28.

It was announced last week that Stadium Super Trucks would join the event after a court upheld CAMS’ decision to suspend its competition licence in Australia.

Run by under the Australian Auto Sport Alliance, which is owned by the Benalla Auto Club, the Australian Motor Racing Series is not overseen by CAMS and is therefore in a position to host Stadium Super Trucks without ramifications.

Sydney Motorsport Park has not hosted the Robby Gordon-owned series before, but suggests the risks involved are acceptable and comparable to what the venue has hosted in the past.

“Naturally for CAMS, the AASA and the ARDC, safety is always the number one priority,” ARDC CEO Glenn Matthew told Speedcafe.com.

“The ARDC had the opportunity to review the risk assess completed by the AASA for Stadium Super Trucks, where all of the issues previously raised – mainly the wheels, hood locks and driving standards – have been addressed by the category.

“The risk assessment included the placement of jumps and the layout of the track, with the aim of minimising any risk or concerns.

“Along with the approval of the Department of Sport NSW, we are satisfied the with the risk assessment they completed.

“We run a FIA Grade 2 facility that requires to have events permitted by accredited organisations such as CAMS and AASA,” Matthews continued.

“Those organisations are in turn accredited by the Department of Sport NSW. If they are satisfied, so are we.”

Sydney Motorsport Park has a history of running non-traditional motorsport events, including the Top Gear Festival which included a number of stunts on what would typically be considered a ‘hot track’.

“We will always try to enable a category or series to use the Park, whether it’s grassroots motorsport or top level competition,” explained Samantha Stevens, ARDC media and digital communications manager.

“We investigated whether we could have Stadium Super Trucks here, considering all aspects of driver and spectator safety. Safety is our number one priority. Us accepting them as a category means that they’ve met the requirements.

“If you have a look at what we did in 2013 and ‘14 with Top Gear Festival – dangling a car from a crane with a driver broadcasting live from inside the cabin; three-wheeled cars ‘kicking’ soccer balls on the main straight in front of thousands of spectators; and a race between a bike, car and F1 car on the track at the same time – I think we can handle a few jumping trucks.”

A private practice day is scheduled for Friday, October 26 ahead of the race weekend itself running October 27-28.