Team-mates are set to become a ‘massively important’ factor in helping decide the outcome of this year’s Supercars title according to championship leader Scott McLaughlin.

The Shell V-Power Racing driver heads into the penultimate round of the season in Auckland with a slender 14 point lead over Red Bull Holden Racing Team’s Shane van Gisbergen following a 33 point swing at the Vodafone Gold Coast 600.

McLaughlin was able to maximise points in Race 26 after team-mate Fabian Coulthard and Tony D’Alberto sacrificed their race by short-filling at the first stop to avoid double stacking in pit lane.

As a result, the time saved played a part in helping McLaughlin and co-driver Alexandre Premat to fifth.

With the business end of the season in full swing, the championship leader admits Coulthard will have a significant role to play in the title battle.

“Massively important,” said McLaughlin when asked about the importance of his team-mate in the final two events.

“Obviously, he was strong this weekend, but they took one for the team (on Saturday), I felt like they had a great car and I thank that side of the garage for allowing us to have pit priority when he was actually in front.

“I think the team is doing a good job and working around that.

“(I’m) excited, last year we came out (of the Gold Coast) behind so we’re a little bit of a step ahead already (but) only really slender.

“We’ve (myself and van Gisbergen) both got good cars around these next two tracks, they’re obviously really strong. 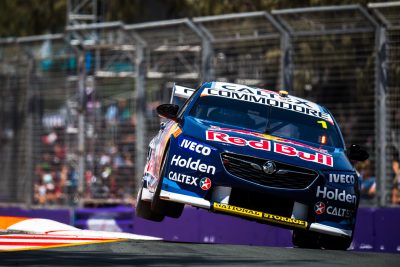 Van Gisbergen feels he has an advantage if team-mates are required to help him to the title over the next month, labelling the situation as a three against one scenario.

The Kiwi will have the full support of Craig Lowndes and Jamie Whincup following a disappointing Gold Coast for the latter.

“Our strength in this situation, we’re a three car team versus a one car team,” said Van Gisbergen.

“Thankfully we seem to always be up there.

“Last year I did everything I could to help Jamie win the championship, we’ll try and do everything we can to help to make #97 win.

“I have to perform as well, turn up to Pukekohe; it’s always a crazy week for us Kiwis.”

The championship battle will continue at the ITM Auckland SuperSprint from November 2-4.