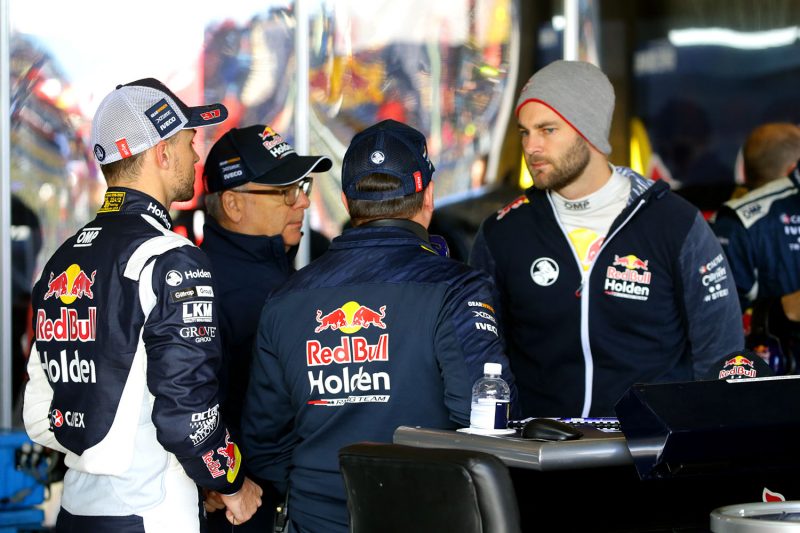 Shane van Gisbergen is contemplating the possibility of a fourth different co-driver in as many years next season with Earl Bamber facing a potential event clash in 2019.

The championship contender teamed up with factory Porsche driver and two-time Le Mans 24 Hours winner Bamber after Matt Campbell was unable to continue in the role due to date clashes with his own Porsche racing commitments.

Van Gisbergen is keen to welcome the Kiwi back next year although Bamber could be unavailable with the Supercheap Auto Bathurst 1000 (October 10-13) clashing with IMSA’s Petit Le Mans, which the latter contested for Porsche this year.

Having never raced a Supercar before this year’s Pirtek Enduro Cup, Bamber has impressed the Triple Eight team leading to high praise from owner Roland Dane, who is yet to confirm the squad’s enduro line-up for next year.

The factory Holden team is set for a shake up as it scales back to two cars following the retirement of Craig Lowndes, who will take up a co-driver role next year and is tipped to partner Jamie Whincup.

This would leave Whincup’s co-driver Paul Dumbrell without a drive which has already led him to suggest a possible retirement at the weekend, while Lowndes’ current co-driver and newly crowned Pirtek Enduro Cup winner Steven Richards is also on the market.

After partnering with Alexandre Premat in 2016, van Gisbergen could be set to work with a fourth co-driver at Triple Eight in 2019.

“That might mean four different co-drivers in four years so might have that job up on the board at Centrelink for Richo.

“(He) wouldn’t be a bad guy to put in, but I’d love to have Earl back and probably Matty Campbell will be at the top of that list; we’ll see what his calendar does. He did a ripper job for us last year.

“It’s been really tough trying to hang on to a co-driver; I get along well with them, but they seem to be leaving for different reasons.

“I mean, it would be perfect for the team and the nostalgia of it all for Craig and Jamie to be together, I don’t know what PD is going to do. It would be cool for the team, even to have Craig back again. He’s going out as a top driver. We’ll see what happens, we’ll see what Earl is racing next year.”

Bamber confirmed that his 2019 future is unknown at this point with Porsche usually announcing driver programs in December but is hoping to know sooner.

“It was an amazing campaign and it was awesome to drive for the team with Shane,” said Bamber.

“It has always been a dream to drive in Supercars. I would like to come back  and win Bathurst and the Pirtek Enduro Cup is a goal.

“I have no idea what I’m racing next year, we’re not told until roughly December, so I’ve got no idea whether I do WEC, IMSA, what I do.

“(I will) have to find that out in the coming weeks.

“(I will) Go back to Germany, having a few meetings next week, so might find out then. At the moment, for all the drivers at Porsche it’s all about race TBC. Not sure where I’ll go at the moment, no idea.”

If Bamber is sidelined, Richards could emerge as a potential replacement having confirmed his intentions to continue co-driving next year following his final drive alongside Lowndes.

“(I think I will) go down to Centrelink, look through the job file and see what Supercar co-driver roles are in there and have a look at what my future holds,” said Richards about the future.

“I’m pretty sure I’ll be back somewhere next year, I definitely want to continue co-driving, I love my role doing that. We’ll see what happens.”