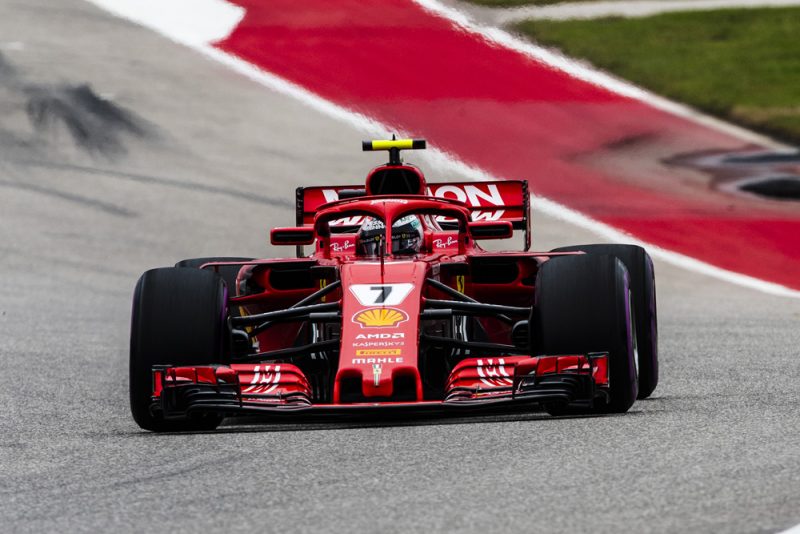 Taking the lead at the start, Ferrari then backed itself in the face of pressure from Mercedes two stop strategy for Hamilton to secure Raikkonen the win with a one stop program.

Between Raikkonen and Hamilton was Max Verstappen, whose incredible performance had seen the Red Bull driver rise from 18th to second.

Raikkonen seized the lead into the opening corner, diving up the inside to take the apex and move past pole-sitter Hamilton.

A messy opening lap saw contact throughout the field, including for Vettel who banged wheels with Ricciardo with the former spinning down the order.

The pair were squabbling for fourth, the German gathering his Ferrari back up to carry on down in 15th.

Alonso was another of those caught out on the opening lap, forcing him into the pits along with Charles Leclerc, Romain Grosjean, and Lance Stroll.

Both Alonso and Grosjean proved retirements owing to the damage they sustained in the melee, Stroll picking up a drive through penalty for contact with the McLaren.

Also a victim of the opening lap was Carlos Sainz, who was handed a five second penalty for leaving the track and gaining an advantage at the first corner.

Verstappen moved up nine places in the opening two laps, benefiting from those around him firing it off the road, to sit ninth.

Ricciardo’s race came to an abrupt end on Lap 9, pulling his Red Bull to a halt midway around the lap with a mechanical failure while sitting fourth.

It triggered the Virtual Safety Car as the stricken car was removed.

Hamilton pitted as Ferrari left race leader Raikkonen out on track, the Englishman rejoining in third place before the VSC came to an end.

Soon, he’d caught and been waved through by Bottas for second, and closed in on Raikkonen by a second a lap.

On Lap 20 Hamilton was all over the gearbox of the Ferrari, forcing Raikkonen to defend into Turn 1.

The Finn remained resolute in his defense, Hamilton clearly enjoying more grip but unable to find a way through on the expertly placed Ferrari before Raikkonen pitted on Lap 22.

Verstappen stopped on Lap 23, the Dutchman rejoining fifth before Bottas took to the lane at the next opportunity.

Mercedes bolted on a set of soft compound tyres and sent him on his way only to lose out to Verstappen courtesy of the undercut.

Ferrari left Vettel on track, the German pulling aside to free Raikkonen in his pursuit of Hamilton who was just over 17 seconds up the road.

By pitting Hamilton under the VSC, Mercedes locked Hamilton in to a two-stop strategy, while the longer opening stint left Raikkonen looking to get through the 56 lap race with just one stop.

It was the same strategy they played for Vettel, who was the last of the front runners to stop when he finally took service on Lap 27 for a set of soft compound Pirelli tyres.

Tyre wear caught up with Hamilton, his pace slowing dramatically at a time Vettel was able to lift his own pace on a set of tyres 15 laps newer than his championship rival.

Hamilton stopped again on Lap 37, taking a new set of soft tyres and rejoining fourth behind team-mate Bottas, who was quickly caught and passed.

Next up the road was Verstappen, the Red Bull driver more than a second off the pace of Hamilton while further back Vettel was closing on Bottas for fourth.

The leading trio began to condense, with Hamilton needing to pass Verstappen to win the championship in Austin.

Running little more than a second apart, the front three likely to hold station for the run to the flag, with Raikkonen from Verstappen and Hamilton.

Vettel launched a late attack on Bottas as Hamilton turned up the heat on Verstappen, but neither were able to remain in DRS distance to take advantage.

Hamilton’s hopes of taking the title in Austin ended when he launched an attack on Verstappen midway around Lap 54.

A better exit off the back straight saw the two run side by side through the final complex, only for Max to position his car perfectly as Hamilton ran off the circuit as he got onto the marbles.

He was able to rejoin without losing a place, but dropped off the back of the leaders without time to regain the lost ground.

Vettel snatched fourth from Bottas on the penultimate lap, using DRS to scythe up the inside at the end of the back straight.

Raikkonen’s win ended a 113 race drought between wins, his last coming in the 2013 Australian Grand Prix, the 21st of his F1 career.

Mexico hosts the next round of the championship, a race Vettel must win to prevent Hamilton from claiming the title there next weekend.