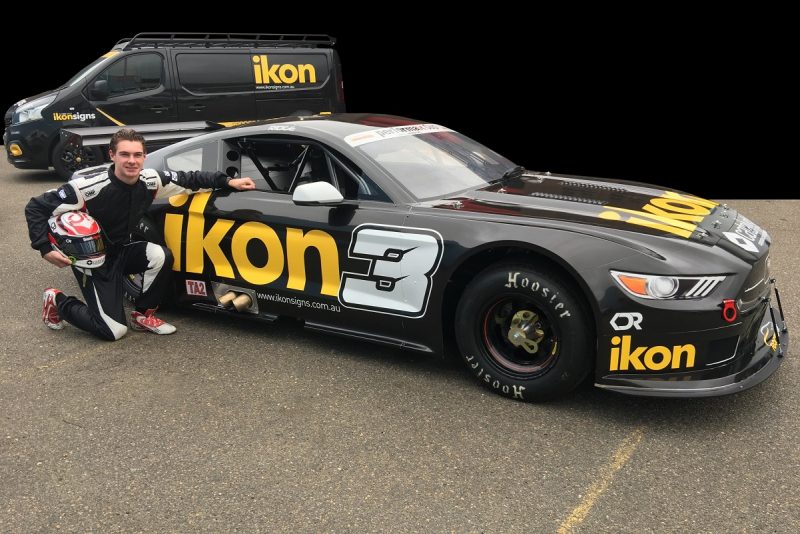 Ridge has had a limited program this year after returning home to the New South Wales Central Coast following a season in the now defunct Audi Sport TT Cup to focus on university studies.

Having shaken down the ikon Signs-backed Mustang-bodied car at Queensland Raceway last month, Ridge is hoping to nail down a full TA2 season in 2019.

“We were up at Queensland Raceway to shake down Ron’s new car and to get a feel for the series,” said the former national karting champion and Asia Cup Super 6 winner.

“We decided together after that to do the final round of this year’s championship and look into doing the full season next year.

“The car itself has a lot of mechanical grip; being a Hoosier rag tyre, it likes to slide around on top of the surface but it’s still pretty stable.

“It naturally has a lot of oversteer but at the same time it’s very controllable. It’s a weird sensation to get used to because it’s not as sharp and pointy, not as direct as some of the other cars I’ve driven especially coming from the front-wheel drive Audi TT last year.

“The main reason for doing this last round is to get an understanding of what the championship offers and it’s a series that’s growing very quickly so it’s really exciting to be a part of it.

“I’ve raced Aaron (Seton, who joined TA2 mid-year) since go karts and we’ve had similar career paths up until now.

“It’s going to be a great challenge; he’s had far more experience than me in these cars and he’s the benchmark in the series so the goal is to be competitive and learn off him as quick as I can and hopefully challenge for race wins.”

Cremen, meanwhile, makes the step from rallying to circuit racing with the new arrive-and-drive operation.

The fellow Central Coast resident is a former manager of the Abu Dhabi Racing team which eventually morphed into a WRC team, and was also team principal of the Citroen Rally Australia Team.

“It’s a big step into the unknown after all the years spent in rallying to now come to circuit racing, but it’s a task we’re really looking forward to in a very exciting category,” said Cremen.

“I’ve spent the last decade overseas running junior rally programs for the Abu Dhabi government. There’s been a wide variety of drivers that I’ve worked with in the training process and it’s really nice to work with another young guy in Drew Ridge; I’m really looking forward to that prospect.

“Realistically it’s great to have a driver in one car for the whole season, but I’ll work with the TA2 Muscle Car Series to promote the opportunity for other drivers to come and experience it, for a full season, a one-off race or a test day.”

Ashley Jarvis leads the series ahead of its seventh and final round this weekend on the Australian Motor Racing Series program (October 26-28).