Elliott wins Round of 12 finale after Harvick penalty

Elliott wins Round of 12 finale after Harvick penalty 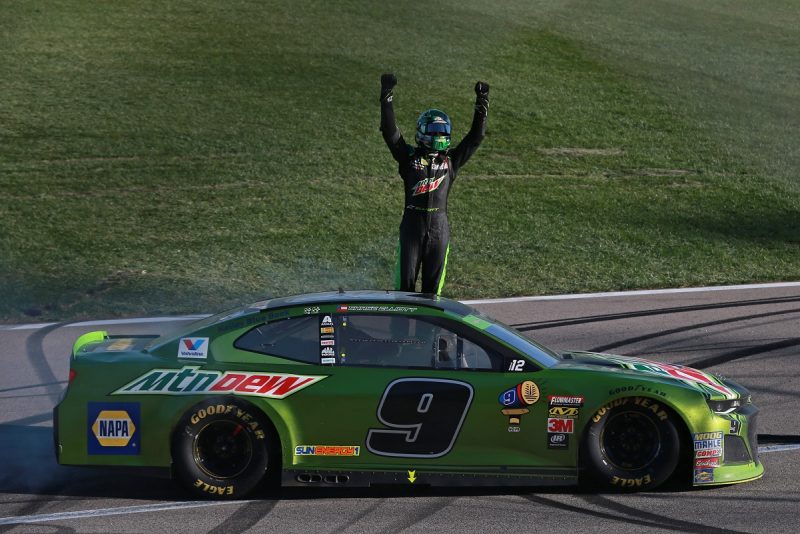 Chase Elliott taken victory in Kansas after Kevin Harvick was penalised for pit lane speeding in the final race of the NASCAR Playoff Round of 12.

Elliott took the restart for the final stage officially in second position but didn’t get away well and dropped in behind leader Harvick and Blaney.

He re-passed the latter a little over 20 laps later before the pivotal moment came on Lap 214 when Harvick pitted midway through a stage which remained green in its entirety.

The #4 Stewart-Haas Racing Ford was adjudged to have exceeded the pit lane speed limit and Harvick was called back in, putting him down in 16th.

Elliott assumed the effective race lead in the #9 Hendrick Motorsports Chevrolet and that became the official lead when Keselowski (#2 Team Penske Ford) pitted with a little over 40 laps remaining.

While Kyle Busch, in the #18 Joe Gibbs Racing Toyota, crept closer to Car #9 in the closing stages, Elliott still greeted the chequered flag a relatively comfortable 0.9s to the good.

The 22-year-old, who also won the first race of the Round of 12 a fortnight earlier, is now fourth in the Playoff Standings.

Blaney (#12 Team Penske Ford) was somewhat lucky to get away with a brush with the wall at Lap 203 before soon giving up position to Kyle Busch and Larson.

He continued to drift down the order as the race wore on and eventually finished seventh, missing the cut by six points.

Larson, too, is out of the title race given that he virtually faced a must-win situation after copping a 10-point penalty for a technical infringement following the preceding race in Talladega.

Keselowski made for two Team Penske drivers eliminated from the series reckoning in sixth position but team-mate Joey Logano, who qualified on pole and won Stage 1 in the #22 Ford, survives having finished eighth.

Alex Bowman came into the race 68 points below the drop and therefore needed win but finished ninth in the #88 Hendrick Motorsports Chevrolet.

All four Stewart-Haas Racing drivers remain in the hunt despite two dropping off the lead lap due to uncontrolled tyre penalties during Stage 2.

Aric Almirola (#10 Ford), who had already booked his place in the Round of 8 by winning a week earlier, got his lap back during the same pit stop cycle and finished 10th.

Kurt Busch (#41 Ford) only got one of his two laps back but scraped into the top eight in the standings by finishing 18th and is now seventh in the Playoff race with the reset.

Harvick is second in the Playoff Standings after making his way back to 12th, having already secured passage with a second placing in Stage 1 before winning Stage 2.

Bowyer, in SHR’s #14 Ford, was last on the lead lap in 13th with a bruised nose due to contact with Jimmie Johnson (#48 Hendrick Motorsports Chevrolet) at the start of the final stage.

The Round of 8 starts with the First Data 500 at Martinsville Speedway on October 27-28 (local time).