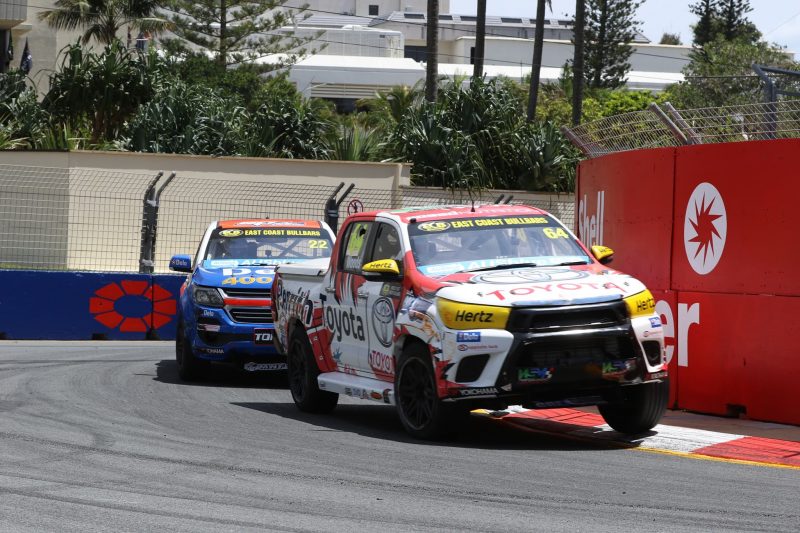 A brave start has set up a win for Craig Woods in ECB SuperUtes Race 3 on the Gold Coast despite multiple hits with the walls.

Woods made it a three-wide run down to the chicane at the front and took the lead into the left-hander, from Tom Alexander and Ryal Harris.

Alexander showed the nose at Turn 12 on the opening lap and clipped the inside wall, which put him into the rear of Woods and saw the #64 Western Sydney Motorsport Toyota Hilux hit the outside wall.

Both pressed on and Harris had a dive at Alexander’s #22 Ross Stone Racing Holden Colorado at Turn 11 on Lap 2, but couldn’t make the move and was instead nabbed by Luke van Herwaarde.

The top two cleared out midway through the eight-lapper as Harris and van Herwaarde continued to battle.

Alexander got a run on Woods down the Gold Coast Highway at the start of Lap 6 and while he filed back in behind in time for the Front Chicane, Woods straightlined it anyway.

Woods continued to make contact with the walls but put a second on Alexander and went on to take his second race win of 2018.

Cameron Crick (#87 Sieders Racing Team Mitsubishi Triton) was an early retirement having climbed over the tyre wall at the Front Chicane on Lap 1.

Richard Mork (#94 Ranger Racing Ford Ranger) completed only the first lap having been turned around by Mick Sieders (#45 SRT Triton) at Breaker Street.

Harris takes the series lead to the eighth and final round at the Coates Hire Newcastle 500 on November 23-25.