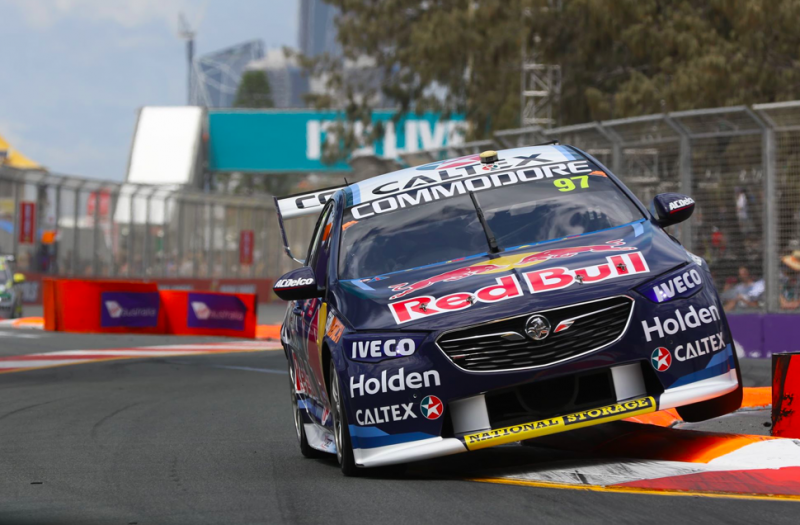 Shane van Gisbergen will be last man out in the Armor All Top 10 Shootout for Race 27 after a relatively early fast lap in qualifying on the Gold Coast.

Van Gisbergen (#97 Red Bull HRT ZB Commodore) was on-track and pushing while most of his rivals were back in pit lane at the end of their second runs and did back-to-back fastest laps to set provisional pole at 1:10.1937s.

It left him one position ahead of the man who took the championship lead off him the day before, Scott McLaughlin.

“There’s a few there and the track was getting better and better throughout the session so probably could have improved a little bit in the last one,” said van Gisbergen, who sat out the last five minutes of the session.

“Now I’ve got to just not stuff up the Shootout. Focus on that, keep between the lines and have a good run.”

McLaughlin was the lone ranger at the top as the only non-Triple Eight entry in the top four.

The Race 26 pole-sitter provisionally qualified second-fastest at 0.1327s off the pace in the #17 Shell V-Power FGX Falcon.

His lap edged Jamie Whincup (#1 Triple Eight ZB Commodore) back a position and while Whincup subsequently improved, he stayed third.

The 2017 Virgin Australia Supercars champion revealed that he was actually affected by a power steering problem during the session.

“I think I dropped half the power steering in that one, couldn’t really maximise chicanes… I was hanging on hard,” said Whincup.

“Just the grip and the binding up that these cars get through the first and second chicane is huge, but we got through and into the (top) 10.

“But we’re not worried about set-up at the moment; all focus is on trying to get the (Steering) rack right because if it doesn’t improve I think it will be a bit of a race stopper.”

Craig Lowndes (#888 Autobarn ZB Commodore) was fourth, while Race 26 winner Chaz Mostert (#55 Supercheap Auto FGX Falcon) used three sets of new tyres to make sure of his place in the Shootout in fifth.

Fabian Coulthard was hampered by engine problems in the #12 DJR Team Penske FGX Falcon and while he made a valiant effort, the New Zealander fell only 0.0031s and one position short of the top 10.

“I had my own Top 10 Shootout in that 20-minute session,” quipped Coulthard.

“It is what it is, mechanical, had a big misfire, car was on seven cylinders so not a hell of a lot I could have done with that.

“Hopefully we can get some sort of result for the guys; they work very hard on my car so it will be awesome to be able to repay them.”

There was an early red flag when Jack Le Brocq stopped up a run-off road in the #19 Tekno Autosports ZB Commodore, which will start last of the 26 cars this afternoon.

Results: Armor All Qualifying for Race 27