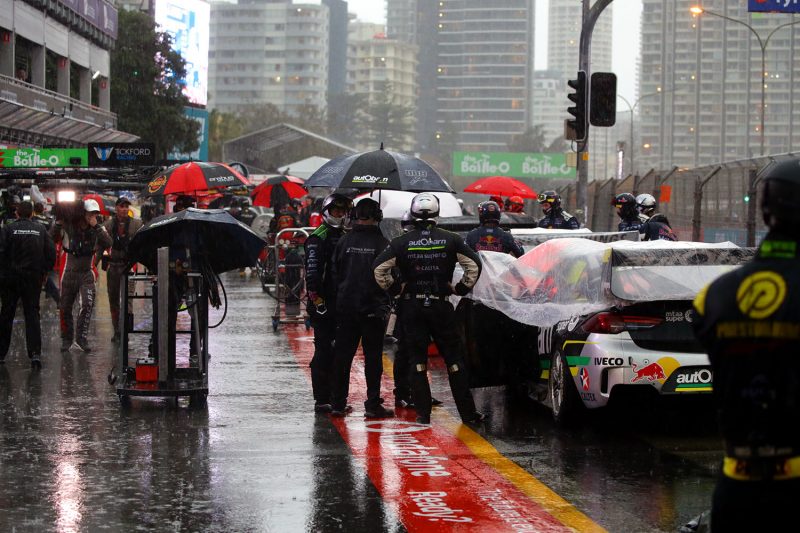 Race 27 was abandoned due to heavy rain

The final race of the Pirtek Enduro Cup was suspended twice due to torrential rain that hit the circuit before it was eventually called on lap 43 of the scheduled 102.

Officials red flagged the race on lap 37 before attempting to restart the encounter in a bid to reach the required 50 percent distance (51 laps) to award points.

While the move to restart behind the Safety Car as conditions worsened was criticised, Seamer believes the call to ultimately abandon the race was correct.

“It was a shame the storms came this afternoon, but officials absolutely made the right decision,” said Seamer.

“The safety of the fans, drivers, teams, marshals and others working around the circuit is paramount.

“Stopping a race is not an easy decision, but that was the right call in this instance.”

While the abandonment was a disappointing finish to the Gold Coast 600, Seamer says the event attracted an increase in crowd numbers while a NASCAR demonstration from Scott McLaughlin and Fabian Coulthard proved a hit with fans.

A Team Penske Ford Fusion cut laps around the Surfers Paradise streets circuit which coincided with Supercars confirming preliminary talks have been held with NASCAR to bring the American category to the event in the future.

“It’s been a healthy increase on last year with a great mix of families and children amongst the crowd, which is why this event resonates so strongly on the Gold Coast,” he added.

“The weather was not kind to us today, but still it was a great weekend all round.

“It was good to meet the Minister (for Innovation and Tourism Industry Development, Kate Jones) on Friday, and we are aligned on the way forward. The NASCAR demonstration was a massive hit with the fans, as were the concerts.”