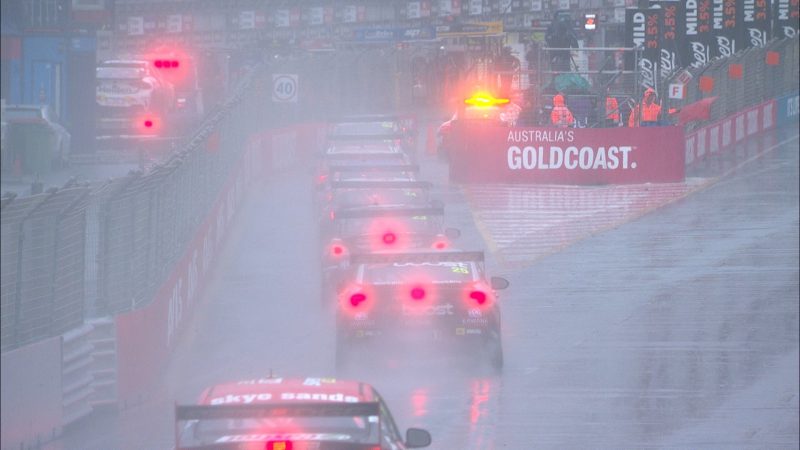 Race 27 of the Virgin Australia Supercars Championship has been suspended pic: Fox Sports

Supercars Championship Race 27 at the Vodafone Gold Coast 600 has been suspended for a second time due to heavy rain.

After the race official resumed from a first suspension, red flags were called on Lap 43 of the scheduled 102, just after 1610 local time.

The cars had been sent back onto the circuit on Lap 38 under the control of the Safety Car in an attempt to make the 50 percent minimum of 51 laps in order for championship points to be awarded.

Anton De Pasquale led the race in the #99 Erebus Penrite ZB Commodore but was still required to change drivers.

The minimum driving distance rule (34 laps/one-third scheduled race distance) had been officially waived during the initial stoppage, but the requirement for both drivers to drive the car remained.

“We haven’t done two CPS, but who knows what the rules are at the moment?” said Erebus Motorsport team manager Barry Ryan moments before the second red flag.

“We’ll just stay out there. The drivers are saying it’s dangerous even at this speed, should be stopping the race really.

Regarding the need to change drivers, he was displeased with how the regulatory change had been made, and believed that there should be no requirement to make the change.

“That’s how we interpret it,” he said.

“But then we see an email come through and you sort of have to race to get your driver in. We’ll just stay.

“They’re not going to do this (circulate under Safety Car) for 10 laps; it just looks ridiculous.

“They just need to stop the race and say it’s a non-event. The only way you can fairly do it now.”

There were reports of hail in parts of the circuit when the field trundled around under Safety Car before the second suspension.

Red flags were first called on Lap 37 of the scheduled 102 due to the extent of standing water on the Surfers Paradise Street Circuit.

The track had already been officially declared wet in anticipation of extreme weather conditions while cars sat on the grid for pre-race formalities.

Spots of rain became evident around 15 laps in, before the heavens opened just before the Lap 30 mark and got progressively heavier.

“Conditions? I’ve never seen anything like it,” said Scott McLaughlin, who had only just got into the #17 Shell V-Power FGX Falcon.

“I think Homebush a few years back (2014) was pretty bad, but this is next level.

“Around the front straight, around the kink, under Safety Car I was losing it and locking up. It was crazy.”

The conditions had already caught out Paul Dumbrell in particular after the veteran co-driver skated Jamie Whincup’s car into the tyre wall on his own at Turn 13.

Dumbrell was then hit by Macauley Jones (#8 Alliance Truck Parts ZB Commodore) in the follow car and got stuck fast in the tyre belt.

Anton De Pasquale leads the race but is slightly out of step with most of the rest of the field given he started in the #99 Erebus Penrite ZB Commodore.

Co-drivers started in 23 of the 26 cars and most of those pitted at the end of Lap 34, the minimum lap mark for either driver, to put primary drivers in due to the challenging conditions. 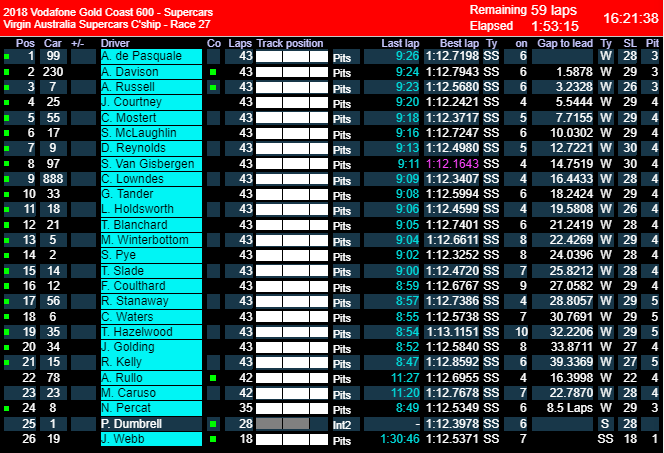 Next Story Race 27 abandoned due to thunderstorms