Race 27 abandoned due to thunderstorms

Race 27 abandoned due to thunderstorms 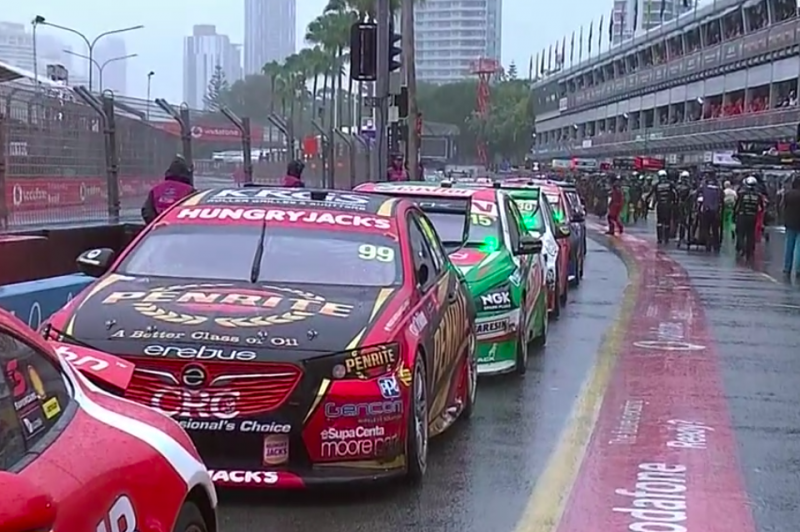 Race 27 has been abandoned due to heavy rain pic: Fox Sports

Race 27 of the Virgin Australia Supercars Championship has been abandoned after a second red flag due to a thunderstorm which is currently lashing the Gold Coast.

The second leg of the Vodafone Gold Coast 600 was initially red flagged on Lap 37 due to the extent of standing water on the Surfers Paradise Street Circuit.

After a delay of over 30 minutes, cars were sent back onto the circuit to circulate under Safety Car, just as conditions worsened again.

The attempt to make the 50 percent race distance of 51 laps for championship points to be awarded was ultimately in vain.

A second red flag was called on Lap 43, at 1611 local time, before Race Control declared the race abandoned at 1626.

Time-certainty was 1648 plus one lap.

It also locks in Craig Lowndes and Steven Richards, in the #888 Autobarn ZB Commodore, as winners of the 2018 Pirtek Enduro Cup.

The track had already been officially declared wet in anticipation of extreme weather conditions while cars sat on the grid for pre-race formalities.

Luke Youlden (#9 Erebus Penrite ZB Commodore) led the first 12 laps from Armor All Pole Position until James Moffat (#55 Supercheap Auto FGX Falcon) made a committed move down the inside at the Hairpin.

Until then, the only major move had been Earl Bamber past Richards on the main straight, the latter of whom made the pass easy for the co-driver of Triple Eight’s main championship contender.

Rain drops became evident a couple of laps later, and Youlden and Bamber had wipers on by the time the New Zealander made the move for second down the Gold Coast Highway at the start of Lap 23.

Jack Perkins (#25 ZB Commodore) capitalised on a small Richards error to elbow has way past at the Hairpin on Lap 24 and team-mate Warren Luff followed.

However, Richards turned Luff around four laps later and while he cleared the scene, Paul Dumbrell had to pull up behind the unfortunate #2 Boost Mobile ZB Commodore and lost net two positions.

Worse was to come for Dumbrell a lap later when he skated into the wall on his own at Turn 13 and was then hit by Macauley Jones.

The contact pushed the #1 Triple Eight ZB Commodore deeper into the tyre belt and Dumbrell was stuck fast, necessitating a Safety Car.

Several had already pitted for wets as light rain became heavy, and the yellows prompted the rest to file into the lane.

Moffat led the race under Safety Car, from Perkins, Alexandre Premat, Youlden, Bamber, and Richards, while Anton De Pasquale in the #99 Erebus ZB Commodore was eighth.

Car #1 was carried back to pit lane on a recovery vehicle.

Come Lap 34, as conditions continued to deteriorate, most pitted a second time to install primary drivers given that minimum driving distance had passed for those co-drivers who started the race.

However, De Pasquale was one of three starting primary drivers and he inherited the lead as the field remained under Safety Car.

The first red flag was called on Lap 37 at around 1525 local time, before the five-minute signal for a recommencement was issued at 1554.

Just prior to the that recommencement at 1559, the minimum driving distance rule (34 laps, equivalent to one-third of the scheduled race distance) was waived.

The requirement for both drivers to drive nevertheless remained, presenting a problem for Car #99.

Just as conditions worsened again, cars began circulating for another five laps under Safety Car before a second reds flag was called on Lap 43 at 1611 local time.

Race Control advised that the race had been abandoned at 1626, meaning that there is no result.

The next event is the ITM Auckland SuperSprint at Pukekohe Park Raceway on November 2-4.