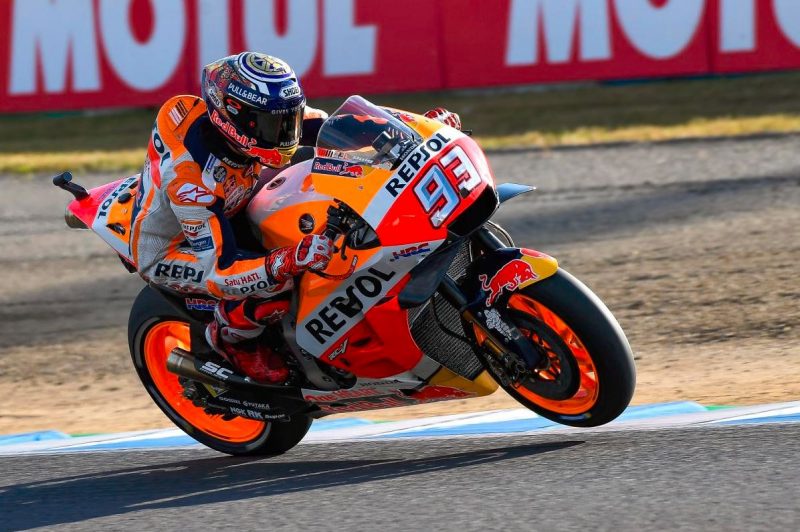 Marc Marquez has won the Japanese MotoGP to confirm himself as the winner of the 2018 MotoGP World Championship.

The Spaniard ran second for much of the race before moving into the lead and raising the pace in the closing stages.

Andrea Dovizioso was able to go with the Honda rider before the Italian lost the front tyre at the hairpin with two laps remaining, ending his hopes of victory in both the race and world championship.

Dovizioso got the jump at the start and held the lead into the opening corner while a fast starting Marquez climbed from sixth to third by Turn 2.

Miller found himself second but was unable to act as a rear gunner for Dovizioso, with Marquez quickly finding a way through to latch onto the back of the race leader.

Once passed, Miller slipped gradually off the back of the front two as the championship contenders began their own private duel.

Crutchlow recovered from a sluggish start to close up on Miller in third, making a move midway around the third lap.

Miller remained in contact with the trio ahead before being joined by Valentino Rossi and Alex Rins to make a group of seven at the front of the race as Andrea Iannone also joined the front pack.

The leading three then lifted the pace, eking clear of Rossi in fourth who’d claimed the spot from Miller.

After a busy start, the race settled into a rhythm in the middle part, with Dovizioso from Marquez and Crutchlow.

Heading into the final 10 laps Rins began close in on the leaders, the Suzuki rider circulating with Iannone, the pair having shaken the remainder of the initial leading group.

The lead battle came to life when Marquez made a move for the lead with 11 laps to go, only to run long over an exit kerb throwing dirt and dust in Dovizioso’s face.

The Ducati rider quickly retook the lead but the squabble allowed the fourth and fifth placed pair to close in, briefly promising a five-way lead scrap before Iannone disappeared after falling at Turn 10 with 10 laps remaining.

Dovizioso and Marquez then lifted the pace, dropping Crutchlow who soon found himself battling with Rins for the final podium spot.

Even still, neither of the leaders were pushing to the limit, keeping some in reserve to save their rear tyre for a sprint in the closing laps.

The fuse was finally lit as Marquez seized the lead at Turn 9 with four laps remaining, moving up the inside before trying to sprint clear at the front of the race to open a gap over his Italian rival.

Dovizioso refused to concede, but the pace proved too great as he overstepped on the penultimate lap.

The Ducati rider lost the front end and slid out of the leading battle, leaving Marquez to win the race with ease from Crutchlow and Rins, almost forgotten in the drama of the world championship defining moment out front.

Miller too went down around the halfway mark when he lost the front end of his Pramac Ducati on and was a non-finisher.

The MotoGP season will now progress to Phillip Island for the Australian MotoGP next weekend.