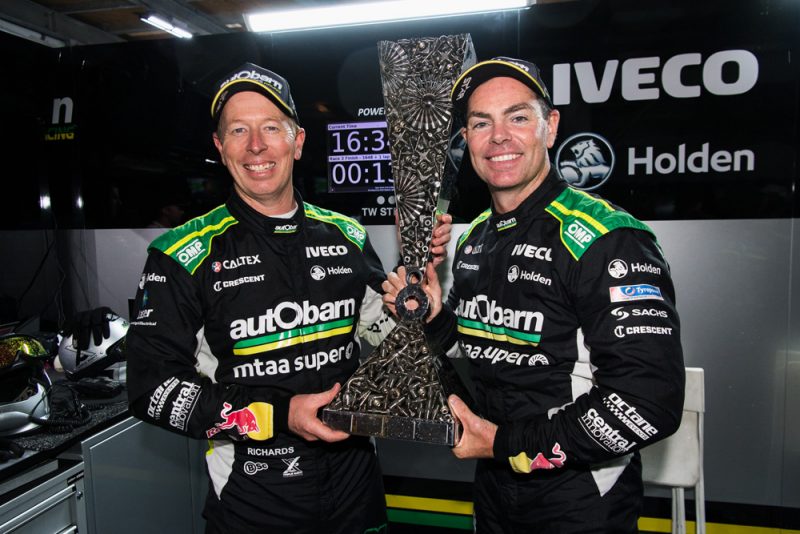 Craig Lowndes and Steve Richards with the Pirtek Enduro Cup

Craig Lowndes and co-driver Steven Richards have been crowned victors of the 2018 Pirtek Enduro Cup following the washout of Sunday’s race at the Vodafone Gold Coast 600.

The Autobarn Lowndes Racing pair held an 87 point advantage heading into the day over Scott McLaughlin and Alex Premat, but with the race failing to reach half distance to qualify for points, their position proved unassailable.

“The last race with Richo, it’s really special to be able to take that back to the workshop, have both our names on it, and for this man here (John McGregor) who’s worked pretty hard this year to give us a car we can do what we do.”

Together, Lowndes and Richards recorded a third at Sandown, won the Supercheap Auto Bathurst 1000, and took second in the opening race at the Gold Coast.

“Right from the outset, when I drove this car, I couldn’t believe how good it was.

“The boys have done a great job all campaign, and here we are. It’s the one trophy I was hoping to get a hold of before I finished driving, and we got it, so it’s great.”

Behind McLaughlin and Premat, who ended the campaign 87 points away from the victors, were Shane van Gisbergen and Earl Bamber.

Trailing their stablemates by 60 points heading into the weekend they ended up 120 points away in the final reckoning after Saturday’s 102 lap race in Surfers Paradise.

It also left a tie for fourth with Chaz Mostert and James Moffat taking the place on a countback over Scott Pye and Warren Luff courtesy of winning on the Gold Coast.