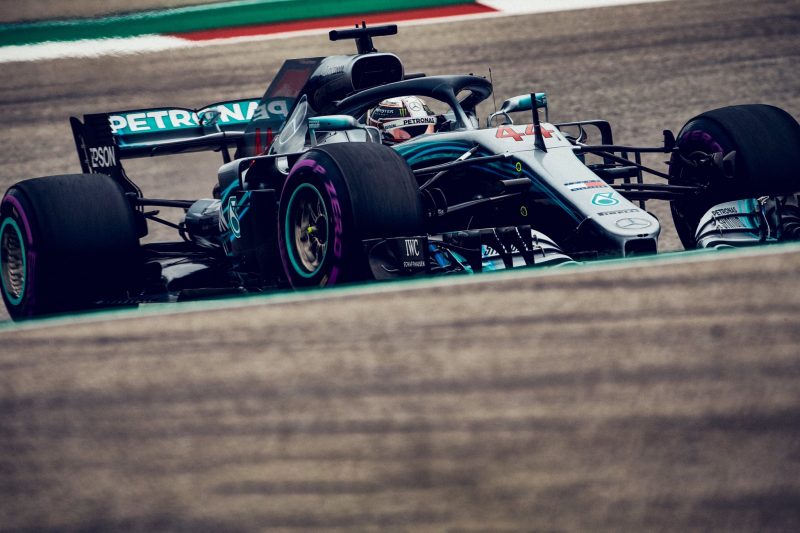 Lewis Hamilton has survived a late charge from Ferrari to claim pole position for the United States Grand Prix.

The top three were split by less than a tenth of a second, with Valtteri Bottas fourth from Daniel Ricciardo, who had a quiet qualifying session.

A slow start to the session saw less than half the field set a lap before the clock ticked over to less than nine minutes to run in the first part of the session.

A right rear suspension failure saw Max Verstappen limp back to the pits, the right rear wheel askew after clipping one of the yellow sausage kerbs designed to prevent drivers from running wide at Turn 15.

Verstappen’s damage proved catastrophic for the Dutchman, who was unable to take any further part in qualifying and was therefore consigned to 15th after he progressed to Q2 but took no part.

Unable to escape the cut at the end of Q1 were Fernando Alonso, Sergey Sirotkin, Lance Stroll, Marcus Ericsson, and Stoffel Vandoorne.

Despite progressing, both Toro Rossos will find themselves relegated to the back row of the grid after taking new Honda engine components heading into the weekend.

Knowing that, neither Hartley nor Gasly completed a timed lap in Q2, though both headed out only to tour through pit lane where they completed practice starts.

A strong opening lap from Vettel saw the Ferrari driver split the two Mercedes, with Raikkonen slotting in fourth.

Vettel improved in the first sector on his second timed lap as the session drew to a close, while Hamilton proved the fastest through the middle split.

Bottas was unable to improve to remain provisionally second before Raikkonen jumped to the top of the heap as the chequered flag fell, only to be demoted by Hamilton.

Vettel was the last of the leading runners to complete his flying lap, going second fastest by 0.061s from Hamilton and just 0.01s faster than team-mate Raikkonen.

With a three-place penalty for a red flag infringement in qualifying the German will drop to fifth, leaving Hamilton on the front row from Raikkonen, with Bottas joined by Ricciardo on row two.

The United States Grand Prix is scheduled to begin at 0510 AEDT on Monday.